About sound and light shows

This sound and light experience is a thrilling thematic journey through Canada's history. Combining digital technology with the architectural splendour of the Parliament buildings, the show highlights Canadian stories of nation building, the evolution of our democracy, exploration, valour, pride and vision at the heart of our country.

Audiences have been captivated by sound and light shows on Parliament Hill for almost 40 years.

Since its debut in 2015, Northern Lights has been a huge success with more than 1 million spectators to date. Northern Lights is the 6th edition of the Sound and Light Show on Parliament Hill.

Key figures, events and achievements from Canadian history are brought to life using 5 distinct artistic styles. All are presented in spectacular detail, with stirring narration and an original score, against the backdrop of the Centre Block and Peace Tower.

The narrative unfolds through 5 thematic "books":

Book One: Foundations of the Nation

A fluid ink-in-water style is used to paint stories of how people from all over the world have expanded our foundations. From traditional indigenous ways of life and early European settlements to modern citizenship ceremonies, these stories are linked by our desire to call Canada “home.” 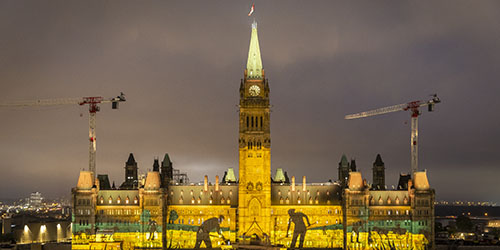 Canada’s path towards democracy and the continued journey to ensure all Canadians’ voices are heard unfold through the reinterpretation of a variety of documentary styles, including engraving, illustration and photography. 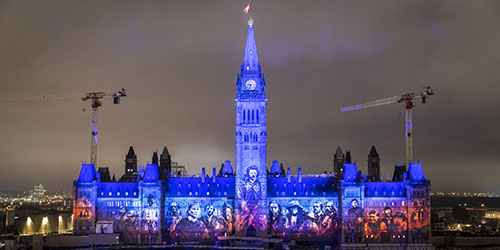 A lithographic style takes us on a voyage showcasing the achievements of explorers, scientists and innovators whose quests into the unknown continue to inspire us to follow our dreams. 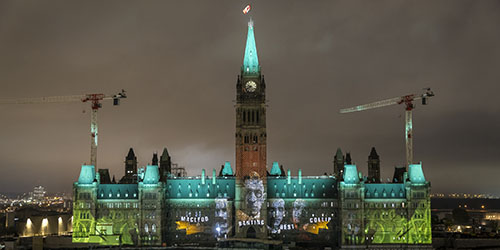 This powerful book combines dramatic performances with archival materials and charcoal drawings to honour the men and women who have served their country, both at home and abroad, in military conflicts since the First World War. 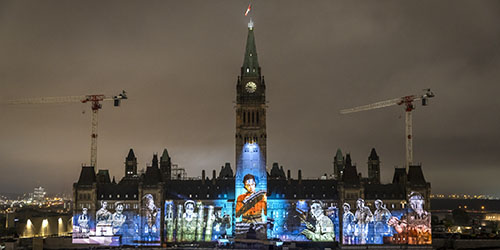 Inspired by the stained-glass windows of the Memorial Chamber in the Peace Tower, this intensely colourful book celebrates the natural grandeur of our country and the diversity of her people. 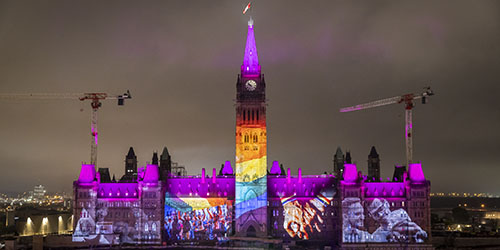 What kind of technology is required to turn the Centre Block on Parliament Hill into a screen more than 143 metres (470 feet) long and 30 storeys high?

Seventeen projectors work together to form a seamless image on the front façade of Centre Block, creating a fully immersive high-definition visual experience.

During Northern Lights, the Centre Block façade is flooded with light by more than 150 moving and static lighting fixtures. These include:

This complex lighting system is controlled by 2 computers and more than 15 km (49,213 feet) of wiring. High-impact lighting and environmentally friendly smoke effects enhance the experience. A colour laser punctuates transitions and adds depth, making this a truly multimedia show.

Northern Lights features an original score, stirring narration and captivating sound effects. These sounds are brought to life on the front lawn of Parliament Hill using an audio system custom-built for the show.

The rich soundtrack is mixed using a 7.1 surround sound system, with 18 speakers set up in 8 different locations around the site. This system was designed to improve the clarity of the narration and soundtrack, creating a more immersive experience. The audio system has a total of 38,000 watts of power, 15,000 of which comes from the subwoofers. The audio signal is fully digital.

Video programming for a large-scale multimedia show like Northern Lights requires specialized software and a powerful control system. The show uses 10 different servers, almost 200 gigabytes of processing power, and 80 gigabytes of video RAM. The image projected on the Centre Block is comprised of over 31 million pixels. (To put this in perspective, a high-definition television screen can display just over 2 million pixels at a time.)

With a show as complex as Northern Lights, many different types of equipment must communicate with each other flawlessly. This communication is made possible through an intricate control system that links lighting, video, audio as well as time code, network and control signals.

This amazing system, designed by the show's technical director and his team, uses 150 km of cable, including just over 7.5 km of fibre-optic cable and almost 1 km of the speaker line. There are 4 different networks, one of which is entirely dedicated to the safety systems related to the show's laser. The system includes more than 2,500 individual connections, all of which must work together seamlessly to bring the show to life.

The projection trailer in the centre aisle of Parliament Hill is covered with LED screens on 3 sides. This “CUBE” of video screens counts down to show time and hosts interactive games before the show. During Northern Lights, the LED screens help tell the story, and a colour laser housed in the CUBE, beams out onto Parliament.

The interactive CUBE activities begin about 1 hour prior to the start of Northern Lights and run approximately 55 minutes.

Audiences have been captivated by sound and light shows on Parliament Hill for almost 40 years.

1984
The first sound and light show is presented on Parliament Hill.
1994

Reflections of Canada: A Symphony of Sound and Light

Reflections of Canada: A Symphony of Sound and Light features a musical score performed by the Vancouver Symphony Orchestra.

In this edition, the 4 winds act as storytellers and the voices of everyday Canadians, from coast to coast to coast, to describe their pride in their country as they reflect on the past and look to the future.

Canada: The Spirit of a Country

This award-winning production uses lighting effects, giant image projection and a tapestry of original music, narration and sound to present the story of Canada through the theme of communication.

Mosaika: Canada through the eyes of its people

This iteration took a big leap forward with the technology used for the sound and light shows on Parliament Hill. For the first time, state-of-the-art technology was used to envelop Centre Block and the Peace Tower in high-definition video. This new digital technology brought with it the opportunity to update the content more easily, and Mosaika saw regular content updates to reflect Canadian milestones. This award-winning production was seen by over a million spectators.

Canadian Heritage worked with TKNL (formerly Idées au cube) of Montréal to create Northern Lights. One of the largest audio-visual production and corporate events firms in Quebec, TKNL is a specialist in graphic and multimedia production. With more than 30 years of experience in the field of communications, TKNL has produced an impressive array of videos and multimedia communication tools, many of which have garnered industry awards.

Canadian Heritage would like to thank the following individuals for their contributions to Northern Lights: