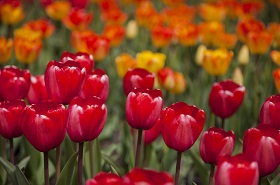 Every spring, Ottawa-Gatineau comes alive with a dazzling display of colourful tulips. Close to one million of the flowers bloom in parks and gardens across the Capital Region. The tulips are part of a tradition that dates back to the Second World War, and are a symbol of the enduring friendship between Canada and the Netherlands.

When the Netherlands was invaded during the Second World War, Dutch Princess Juliana and her family were forced to flee. Juliana and her two young daughters set sail for Canada, an allied country and safe haven far from the conflict. The three were given a warm welcome in Ottawa, where they lived throughout the war. In 1943, the bond between Canada and the Netherlands was made even stronger, when the Princess’ third child, Margriet, was born at the Civic Hospital in Ottawa.

In the occupied Netherlands, the Dutch people experienced hardship, oppression and starvation. In 1945, their ordeal came to an end as the Allies advanced across the country. Canadians played a significant role in the liberation of the Netherlands, an accomplishment for which the Dutch still remember us today. 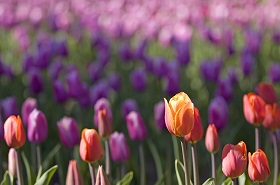 After the war, the Dutch people and Princess Juliana expressed their thanks to Canada by sending thousands of tulip bulbs to the Capital. The Gift of Tulips became a yearly tradition. Every year, the Dutch Royal Family and the people of the Netherlands each send 10,000 bulbs to Ottawa.

The Gift is planted in two flower beds in Ottawa. One bed, at the Ottawa Hospital, Civic Campus, pays tribute to the birth of Princess Margriet. The other is the Queen Juliana Gift Bed in Commissioners Park. The tulips planted in these beds are in shades of pink and purple – Juliana’s favourite colours. 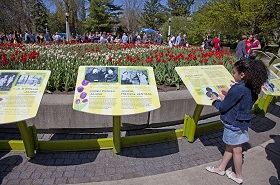 Learn more about the Tulip Story by visiting the Tulip Legacy Exhibit at Commissioners Park. You’ll find out about:

The Queen Juliana Gift Bed is filled with tulips given to Canada’s Capital by the Dutch Royal Family and the Dutch Bulb Growers Association. The annual gift of tulips represents the long lasting friendship between Canada and the Netherlands.

The National Capital Commission, official gardener of Canada's Capital, plants close to 100 different types of tulips and thousands of other spring flowers to offer breathtaking sights.

Tulips are planted in dozens of beds, large and small, around the Capital Region. The highest concentrations of tulips are found in these places in Ottawa and Gatineau. 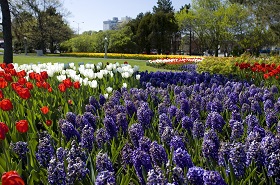 The region’s most spectacular display of tulips is at Commissioners Park, near Dow’s Lake. More than a quarter of a million tulips, in dozens of varieties, bloom in the park’s 26 flower beds. The displays change each year, as new bulbs are planted. Prime photo spots are marked by signs in the park. 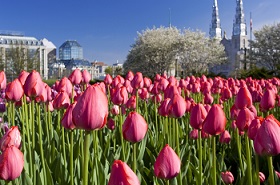 Major’s Hill Park is in downtown Ottawa, at the intersection of St. Patrick Street and Mackenzie Avenue. Photos taken here capture the contrast of colourful tulips against the limestone of the Notre Dame Cathedral Basilica of Ottawa. The National Gallery of Canada and the Parliament Buildings also provide spectacular backdrops. 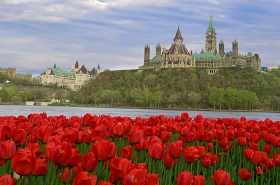 (Ottawa River shoreline behind the Canadian Museum of History) 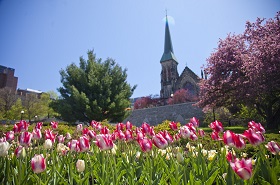 Garden of the Provinces and Territories, Ottawa

This calm and restful park is a hidden gem in downtown Ottawa. With Christ Church Cathedral (built in 1873) as a backdrop, photos taken here showcase tulips blooming in the city. 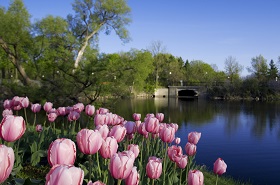 This charming little park is at the intersection of Montcalm Street and Alexandre-Taché Boulevard. In addition to the tulips, you’ll also find one of downtown Gatineau’s oldest buildings – the former pumping station which now houses the Théâtre de l’Île. This property once belonged to the Wrights, one of Hull’s (now Gatineau’s) founding families.