Faced with the novel coronavirus (COVID-19) spread, the Department of National Defence (DND) and the Canadian Armed Forces (CAF) are taking unprecedented measures to protect the health and well-being of its members, prevent the spread of this disease, and continue essential military operations.

How the military is responding to COVID-19

The Canadian Armed Forces is always ready to respond to emergencies in times of need, as requested by the Government of Canada.

Tha Canadian Armed Forces (CAF) has transitioned out of all the Long Term Care Facilities (LTCFs) in Quebec and Ontario, but will maintain a small reserve capacity to respond to any outbreaks that may overwhelm Quebec’s ability to respond rapidly and effectively.

Starting mid-May, CAF and the Department of National Defence (DND) started to provide updates to inform Canadians about the number of CAF members affected by COVID-19, as a result of their work in LTCFs in Quebec and Ontario.

As of July 6, the breakdown of COVID-19 cases within the CAF population employed on Operation LASER, who worked in LTCFs in Quebec and Ontario is as follows:

These numbers are based on the most recent information that has been reported.

We have taken significant precautions to protect our personnel and to prevent further spread of the virus by adapting its Force Health Protection Measures, Public Health Measures, and Personal Protective Equipment (PPE) protocols accordingly. The CAF is also following expert advice from the Public Health Agency of Canada.

The following preventative or mitigation measures have been adopted by CAF personnel working in long-term care facilities (LTCFs) to minimize the risk of contracting COVID-19:

Before deploying in LTCFs, all CAF personnel were trained in a number of areas including safe movement of patients, protocols for wearing and using PPE. CAF medical personnel received additional training on assisted feeding and bedside care. CAF personnel underwent a familiarization and orientation period in the LTCF establishment to ensure their work was properly structured and effective once they commenced duties. They also received mental health and resilience training to prepare them for the current reality in LTCFs.

Additionally, to limit the spread of infection, the CAF arranged hotels for CAF members providing direct on-site support to LTCFs. Independent food, transportation and laundry services were available to personnel to ensure self-sufficiency.

The CAF understood there was potential for members working in LTCFs to contract COVID-19. This was taken into account in our planning processes, given that our personnel would be operating in high risk environments and working in close proximity to residents who have tested positive or are exhibiting COVID-19 related symptoms.

The CAF took appropriate and decisive measures to mitigate risk to the health, safety and overall wellness of LTCF residents, staff and military personnel. At the first sign of symptoms consistent with COVID-19 the CAF member is placed in isolation for 14 days and/or tested in order to confirm the diagnosis. If required, the member will receive the needed medical and personal support until their health is recovered. Contact tracing is also conducted to help limit the spread of the infection.

CAF members were also required to undergo a 14-day period of self-quarantine before and after deploying, and if they began to display symptoms of coronavirus infection.

At the first sign of symptoms consistent with COVID-19 the CAF member was placed in isolation for 14 days and/or tested in order to confirm the diagnosis. If required, the member would receive the needed medical and personal support until their health is recovered. Contact tracing was also conducted to help limit the spread of the infection.

The health and safety of CAF personnel and their families is paramount and we will continue to take appropriate measures to mitigate the risk to our personnel and preserve our operational capabilities and readiness for current and future deployed operations.

The Canadian Armed Forces is following expert advice from the Public Health Agency of Canada (PHAC) and taking precautions to protect our people and to prevent further spread of the virus. These precautions include the following: 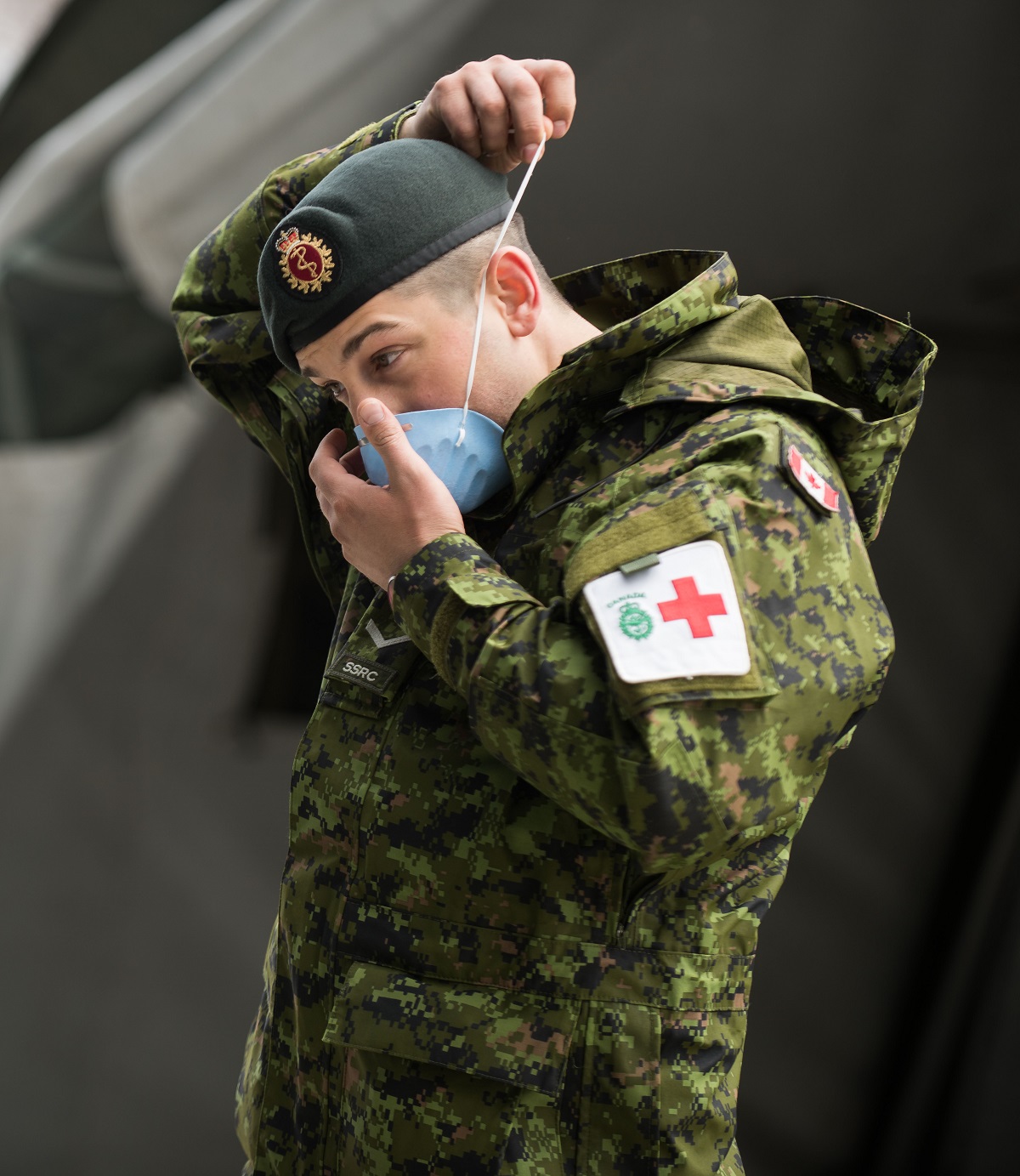 We received a question from a reporter and thought the answer would help everybody understand the situation better.

As is the case for any deployed operation – be it domestically or internationally – Canadian Armed Forces members have an obligation to report their observations as they pertain to the mission. It is in this context that CAF personnel supporting Long Term Care Facilities (LTCFs) as part of Operation LASER document and report any observation that could be detrimental to LTCF occupants, their employees and to the mission.

This report reflected what had been dealt with, not what was ongoing. There were no situations that the CAF was unable to deal with.

The intent of reporting these observations is to provide constructive situational awareness to the chain of command and report on any possible issue that might hinder mission success or, more importantly, bring harm to those we serve.

CAF members deployed in LTCFs in Ontario and Quebec reported their observations to facility directors immediately after observing concerns with professional conduct or practices, and immediately took steps to remedy shortfalls in care homes (mentoring, use of PPE, supply chain).

Moreover throughout the reporting process, the CAF ensured that any emergency or potential criminal situation was reported to the police or coroner immediately. The report was intended, therefore, as an operational report on the situation rather than a mechanism to take immediate action for any lifesaving scenario. Those situations were dealt with by our members on the ground.

Issues in the key areas of Standards and Quality of Medical Care were also collated and consolidated in formal medical reporting to ensure that these observations were brought to the attention of chain of command, the Provinces of Ontario and Quebec, and most importantly, at the individual LTCF.

The observational reports and the letters from Regional Joint Task Forces were received by senior military personnel on 15 May (Ontario) and 21 May (Quebec).

Senior leadership heard their concerns and transparently sent them higher without delay, given their impactful contents.

On the same day each report was received, the Chief of the Defence Staff (CDS) gave direction to prepare formal reports to the Minister of National Defence.

Appropriate care and review was expeditiously applied to prepare and review the reports, both from an operational and a legal lens, in the following days.

The CDS reports (signed on 21 May for Ontario and on 25 May for Quebec) to the Minister of National Defence, were submitted on 22 May (Ontario) and on 25 May (Quebec).

The observations were disclosed in their entirety to Canadians on 26 May by the Province of Ontario and on 27 May by Quebec.

Any suggestion that there was delay in reporting is inaccurate.

It’s important to remember that while these official reports were being processed through the proper channels, CAF personnel on the ground did advise their provincial counterparts of the observations and, more importantly, took actions to address the situation.

Key figures within each province were informally made aware of the general themes of CAF observations so improvements could be made straightaway.

Far more importantly, for the health of the residents who are the focus of all concerned, the CAF shared their general observations with the managing authorities of the designated LTCFs, and each CAF Augmented Civilian Care team addressed their own observations with the LTCF management and the competent medical authority available at each site.

Through the whole process, CAF members on the ground continued to work around the clock to stabilize conditions and improve the quality of life of patients.

We continue to proudly serve Canada’s most vulnerable populations and we will continue to do so while exercising the highest standards of conduct and performance.

The Canadian Armed Forces is taking strides to prevent the spread of COVID-19 among our members while preserving our ability to conduct mission-essential military operations.

All mass gatherings and routines that put people in close contact for voluntary or duty reasons, except essential force generation activities and exercises, have been cancelled or postponed.