Section 2: Evolution of the profession of arms

Throughout history, military forces have been associated with the evolution of the state. In the early modern period — usually dated from the Peace of Westphalia in 1648 — central governments consolidated their monopoly of power and control over their territories, and these forces were centralized and subordinated to sovereign governments. With the emergence of Western liberal democracies, the principle of civil control of the military gained widespread acceptance, meaning essentially that civil authorities set policies and the military executed their missions solely in response to government direction. These militaries, however, did not begin to take on the attributes of a modern profession until the turn of the 19th century.

By mid-century, rapid advances in military technology and concepts of centralized command and control caused Western forces to accelerate the process of professionalization. By the time of the U.S. Civil War (1861–64) and the Franco-Prussian War (1870), extensive use of railroads and the telegraph required the development of general staff systems, including the schools — from cadet to senior officer — to support them. This facilitated the management of the specialized knowledge needed for effectiveness at the right place and time.

One important consequence of these developments was the end of hereditary appointments, the purchase of commissions and other time-honoured traditions of officership. With these anachronisms no longer in place, the way was clear for further progress based on merit and higher education. By the end of the 19th century, almost every Western army and navy was embracing professionalization.

This new trend of increasing military professionalization was part of a larger movement in Western societies. Such then-emerging professions as medicine and law — two of the earliest disciplines to subject their practitioners to regulation and codes of conduct — demonstrated a growing tendency to regulate and control the practice of specific skills that benefit the community as a whole. In addition, governments introduced the professional licence as a means of maintaining “good standing” with recognized governing bodies.

In fact, professions have developed in the West in response to two imperatives: a societal imperative to ensure their ability to successfully fulfill their special responsibility to the community and a functional imperative to guarantee the necessary high quality and relevance of their systematically acquired body of knowledge. The implications of these imperatives for the profession of arms will be discussed in detail in Section Three.

This manual will adopt the following definition of a profession, which has been synthesized from the scholarly literature:

Professions are characterized, therefore, by specific attributes: responsibility acknowledges a special duty to society; expertise describes the body of abstract theoretical knowledge they possess; identity reflects the members’ unique standing within society; and vocational ethic makes explicit the particular values and obligations that form the foundation of the profession, underpinning and binding it together. In the profession of arms, this vocational ethic is subsumed in the broader construct of the military ethos. Last, professions practise their expertise within specialized domains accepted as legitimate by society and closely regulated by government.

The collective nature of military action, and the necessity that nation-states exercise a monopoly over the use of force within their boundaries, mean that military professionalism is exercised within the institutional setting of navies, armies, air forces and, with increasing frequency, organizations consisting of two or more of these services, referred to as joint commands, such as the Canadian Expeditionary Force Command (CEFCOM), Canada Command (Canada COM), Canadian Special Operations Forces Command (CANSOFCOM), and Canadian Operational Support Command (CANOSCOM) or the Unified Commands of the U.S. forces.Footnote 2  Given the constitutional forms of governance adopted in the West, coupled with the values that most Western societies share, the military profession is expected to adhere to a military ethos reflecting these values and to remain subordinate to the civil authority.Footnote 3 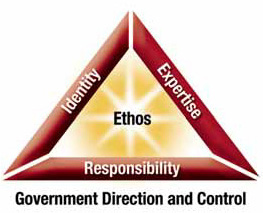 Although the profession of arms reflects many of the characteristics of other professions, it is distinguished from them in two respects.

In the profession of arms, for example, specialization results in a division of labour that is reflected both in its functional structure (environments, branches, etc.) and in its hierarchical rank structure, which then allows for the assignment of specific responsibilities. Expertise is distributed throughout the military profession as a result of this specialization and must be mobilized, focused and coordinated if it is to be effective. At the same time, all members of the profession share a core identity and a common responsibility that is manifest in the values described by the military ethos.

As described in the Strategic Capability Plan, the word “joint” connotes activities, operations, organizations, etc., in which elements of more than one service of the same nation participate.

The scholarly literature upon which this discussion of professions and military professionalism has been based, and which likewise informs the rest of this manual, can be found in the selected bibliography.