The official description, eligibility, criteria, and history of the UN Observer Mission in Sierra Leone/UN Mission In Sierra Leone (UNOMSIL/UNAMSIL). 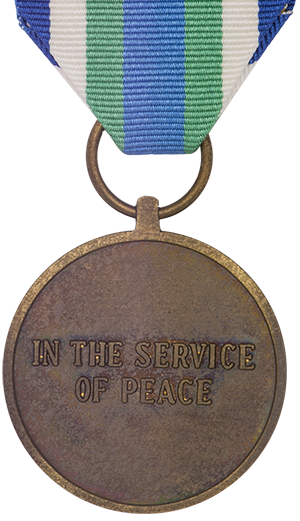 UNOMSIL's purpose is to monitor the military and security situation in the country as a whole: as security conditions permit, to monitor the disarmament and demobilization of former combatants concentrated in secure areas of the country; assist in monitoring respect for international humanitarian law, including at disarmament and demobilization sites, where security permits; and advise, in coordination with other international efforts, the Government of Sierra Leone and local police officials on police practise, training, re-equipment and recruitment—in particular on the need to respect internationally accepted standards of policing in democratic societies.

Awarded for 90 days consecutive service between 22 October 1999 to the present.

The ribbon has a central stripe of UN blue flanked by stripes of green, white, and dark blue.

The medal shall be worn in sequence prescribed in the Canadian Orders, Decorations and Medals Directive, and in the following manner: on the left breast, suspended from the ribbon described above, after the UNMIK medal and before the UNAMET medal.