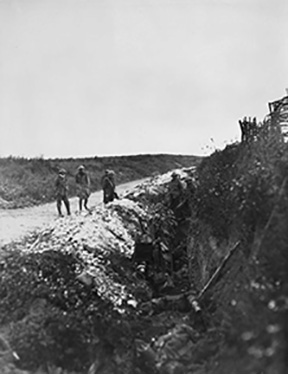 A battle honour incorporating the tactical incidents “Capture of Montauban”, “Capture of Mametz” , “Capture of Fricourt” , “Capture of Contalmaison” , and “Capture of la Boisselle” with the subsidiary “Attack on the Gommecourt Salient” , formally entitled the “Battle of Albert, 1916” and itself being part of the “Operations on the Somme” (1 July — 18 November 1916).Footnote 1 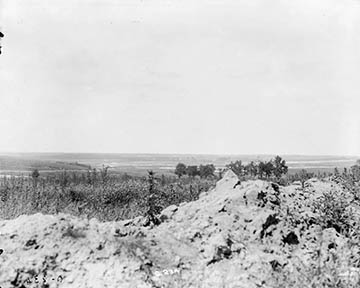 General view of battlefield looking towards Contalmaison (Battle of the Somme). July 1916.
Canada. Deparment of National Defence/Library and Archives Canada/PA-000198; (MIKAN no. 3520937)

The Honour, “Albert, 1916” was awarded for the opening phase of the Operations on the Somme that began on 1 July 1916. The Royal Newfoundland Regiment was uniquely awarded the Honour as “Albert (Beaumont Hamel) 1916”. This was in recognition of its significant sacrifice on the 1st of July. Although the Regiment was originally tasked to be part of the attack on the second line of German defensive positions, the Newfoundlanders were pressed into action due to the difficulties encountered by the first wave of British soldiers in trying to take the first German position. With stoic determination, the Newfoundlanders made valiant attempts to attack the German line. The German defensive barbwire was not cut and the German positions that should have been destroyed by artillery were not. The Newfoundlanders paid a terrible price that morning suffering more that 700 killed, wounded and missing.