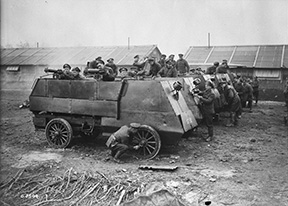 Between the rivers Avre and Somme

A battle honour formally entitled “Battle of the Avre” and itself being part of “The First Battles of the Somme, 1918”.Footnote 1

The Honour “Avre” was awarded as part of the defensive battles following the German Spring offensive in 1918. The only Canadian Regiment involved was the 1st Canadian Motor Machine Gun Brigade in support of British formations of the Fifth Army. The Machine Gun Brigade was detached from the Canadian Corps and its mobile batteries were used to delay the advance of German units. These batteries were very effective in their assigned roles.