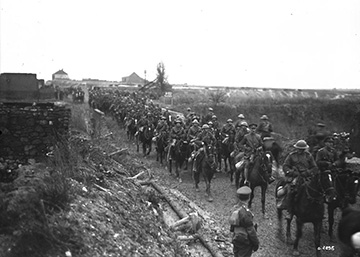 A battle honour incorporating the tactical incidents “The Tank Attack”, “Capture of Bourlon Wood”, and “The German Counter Attacks”, formally entitled the “Battle of Cambrai, 1917”, and itself being part of “The Cambrai Operations (20 November – 7 December, 1917)”.Footnote 1

The Honour “Cambrai, 1917” was awarded for the British offensive against the Hindenburg position in front of Cambrai at the end of November 1917. The bold plan intended to use 300 tanks in mass, without a preparatory artillery bombardment, in order to achieve surprise. When the attack began on 20 November surprise was complete and British forces advanced 4 miles into the German areas. On the first day of the attack, The Royal Newfoundland Regiment was part of the assaulting infantry that advanced deep into the German lines to Masnières, where German resistance stiffened and halted the advance. It was in this same area that the Canadian Cavalry Brigade (Brigadier-General J.E.B Seely), then part of the British 5th Cavalry Division, had advanced. One squadron of The Fort Garry Horse had made it across the canal at Masnières where it fought off several German counter-attacks, delaying the enemy's advance on the village before falling back across the canal. From the second day of the attack the British forces were focussed on beating back German counter-attacks forcing the units of the Canadian Cavalry Brigade to be placed in defensive positions. The lack of British reinforcements, combined with the massive German counter-attacks, forced the British back to within a mile of their start line over the next few weeks. Even if the operation had not kept all its gains, this attack had shown the value of the tanks when massed together and foretold the new form of warfare.