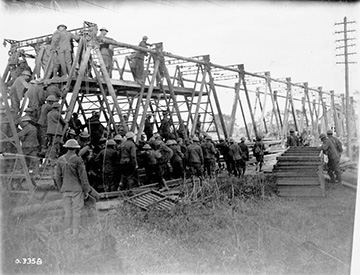 A battle honour incorporating the tactical incident “Capture of Bourlon Wood”, formally entitled the “Battle of the Canal du Nord”, and itself being part of “The Battles of the Hindenburg Line”.Footnote 1

The construction of the Canal du Nord had been halted by the outbreak of war in 1914. When the Canadian Corps (Lieutenant-General Sir A.W. Currie) approached it in the autumn of 1918 they found the obstacle to be impassable. The vicinity of the canal was marked by swampy areas, broken bridges and formidable German defensive positons called the Canal du Nord Defence Line. The Canadian Corps Commander, Sir Arthur Currie, carried out a local reconnaissance. He noted that to the right of the Canadian lines was a dry section of canal opposite the village of Inchy-en-Artois. With the permission of Field-Marshal Haig, the Canadian Corps boundary was stretched 2600 yards south to incorporate this piece of terrain. Currie then planned on a crossing on an extremely narrow three-brigade front. Once over the obstacle the Corps would be funnelled through this narrow opening fanning out on the far bank to take the German lines from the rear. On the night of 26 – 27 September the assault crossing was successfully completed. Pre-built and positioned bridging was then deployed over the canal as the artillery and follow-on infantry forces crossed in the wake of the assault brigades. The following day the 4th Canadian Division (Major-General Sir D. Watson) captured the steep hill crowned with the ancient oak trees of Bourlon Wood a feature which dominated the approaches to the city of Cambrai.