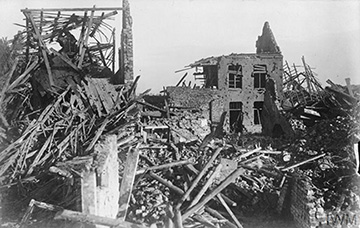 A battle honour formally entitled the “Battle of Poelcappelle” and itself forming part of “The Battles of Ypres, 1917”Footnote 1

The honour “Poelcapelle” was awarded for the actions on the northern edge of the Passchendaele Ridge. Meant to continue pressing the Germans in the area after the success at Polygon Wood and Broodseinde, the attack was centred on Poelcapelle, a village on the high ground west of Passchendaele. Although the village was taken, the attack was a limited success in that it did not push the Germans as far back as intended. The attack did however secure what would be part of the “jumping-off” line for the Canadian Corps attack on Passchendaele. The Royal Newfoundland Regiment was involved in the attack as part of the British 29th Division. The Newfoundlander's attack that day resulted in 67 killed, 127 wounded and 33 decorations for gallantry. Canadian involvement in the attack was limited to a supporting role by the â€˜2nd Battalion, Canadian Railway Troops, CEF'.