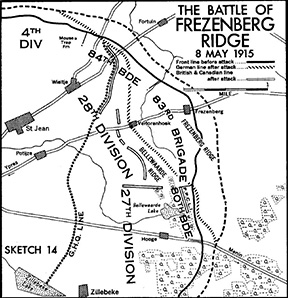 This Honour “Ypres 1915” was awarded to Canadian units for their actions defending against German attacks launched in April 1915. In mid-April 1915 the 1st Canadian Division (Lieutenant-General E.A.H. Alderson) took over a section of the front line northeast of the town of Ypres itself. On the 22nd of April, the German Army launched its first gas attack of the war on the Ypres front at Gravenstafel. The gas concentration was directed to the left of the Canadian portion of the front line, where French colonial troops and British artillery held the sector. As the Germans attacked behind and through the gas, the French troops, with the chemical weapon clearly inhibiting their ability to defend the ground and without any defences against it, fell back. The retreat opened up a large gap on the Canadian left flank, forcing the division to protect that flank as well as the line in front of its position. The Canadians maintained a determined defence against the German attacks on their left flank, and several of their counter-attacks were mounted with at least some local success. The largest counter-attack was on the night of 22-23 April against Kitcheners Wood to retake British guns. The actions of the 1st Canadian Division prevented the Germans from breaking through of the British front line. The Germans launched a second attack on 24 April. Directed at the Canadian positions near St.-Julien, this second use of gas fell upon the 2nd (Brigadier-General A.W. Currie) and 3rd (Brigadier-General R.E.W. Turner) Canadian Brigades. Suffering heavily from the gas, the forward troops fought valiantly to hold their positions but the Canadian division was forced back to the south of St-Julien. British reinforcements helped stabilize the situation and the front line was still held forward of Ypres. The next major German assault involved The Princess Patricia's Canadian Light Infantry, then part of the British 27th Division. The PPCLI was involved in two actions to fend off fierce German attacks along Belewaarde Ridge on the eastern side of Ypres. Most notable was the PPCLI's determined defence on Frezenberg Ridge on 8 May. German efforts to take the town of Ypres in 1915 ended later that month. 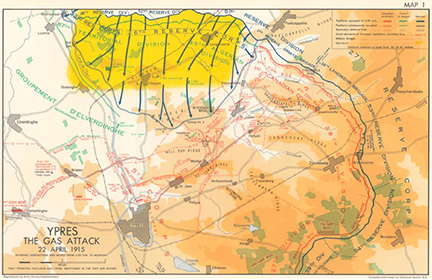 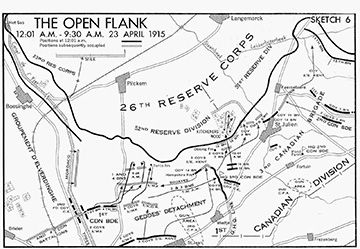 Sketch depicting the counter-attack in Kitchener’s Wood, following the retreat of French colonial forces at the Second Battle of Ypres, 1915.
Credit: Sketch by Nicholson, found in C.E.F. 1914-1919 p.65.

GO 6/28; United Kingdom, War Office, The Official Names of the Battles and Other Engagements fought by the Military Forces of the British Empire during the Great War, 1914-1919, and the Third Afghan War, 1919: Report of the Battles Nomenclature Committee as Approved by the Army Council (London, 1922), p.14