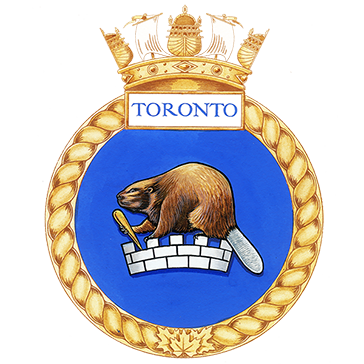 Azure a mural crown Argent masoned Sable surmounted by a beaver proper holding in the dexter paw a fid spike Or.

A mural crown over the shield in the arms of a community usually indicates that the place is or was a fortified settlement. In the Arms of Toronto reference to Old Fort York is made by the display of the mural crown above the shield. This is surmounted by a beaver, which here is intended to refer to industry and also to the fact that Old Fort York was once a centre of fur trade with the Natives in that region.

The badge of Toronto does honour to that city by using the crest from the civic arms with necessary and appropriate difference by having the beaver hold a fid which associates the Toronto beaver with things nautical.

Toronto served on escort duties off the coast of Nova Scotia and in the North Atlantic with 'Halifax Force'.Footnote 6