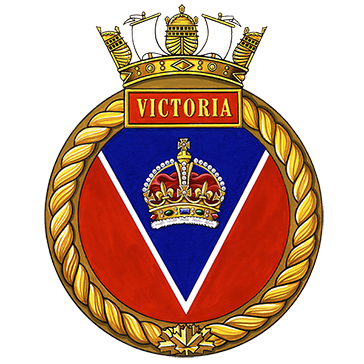 Gules on a pile Argent another Azure charged with a representation of the Royal Crown proper.

The badge uses a "V" format, a reference to the Victoria class of submarines. The vessel was named for the City of Victoria, British Columbia, and the badge is derived from the shield of the City's Coat of Arms. The colours of the city's shield have been reversed to place the colour blue, associated with the navy, above all other colours. The Crown, in a form often used during Queen Victoria's reign, is depicted on the blue portion of the badge.