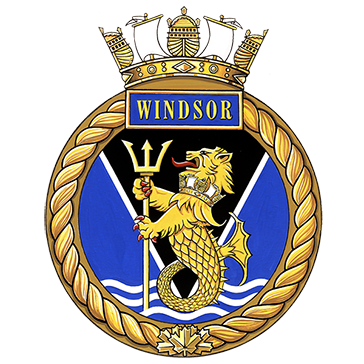 Azure in base three barrulets wavy Argent thereon a pile Argent overlaid of another Sable overall a sea lion grasping a trident Or and gorged with a naval coronet also Or sails Argent.

The badge incorporates a "V" in reference to the Victoria class of submarines. The colours blue and black refer to the colour of water both above and below the surface. The lion supporter of the Arms of the City of Windsor, for which the vessel is named, has been given a fish's lower portions and a trident in reference to the vessel's offensive and defensive capability.