You can access the Age Brackets screen from Administration. The Age Brackets screen is used to modify the set of age ranges used in certain HIFIS statistical reports. For example, in the Age and Gender Statistics report you can isolate figures for a particular age range, such as children from 2-10. You can change the age range within each bracket and can also set the Number of Brackets.

An age bracket is the age ranges that will be grouped together in the report. Brackets must be sequential. The top of one bracket is always one year less than the bottom of the next bracket. Age ranges can be as low as one year, so that people of a certain age are isolated in a report.

The Number of Brackets refers to the number of different age ranges that you have defined in the age bracket set. You can set this to a maximum of 8 brackets per Age Set.

An Age Set is the name given to a particular set of Age Brackets. The name cannot contain numbers or other characters. When you run a report that uses Age Brackets, you can choose which of your customized Age Sets you want to use.

Louise decides to create two Age Sets, one named for each funder. 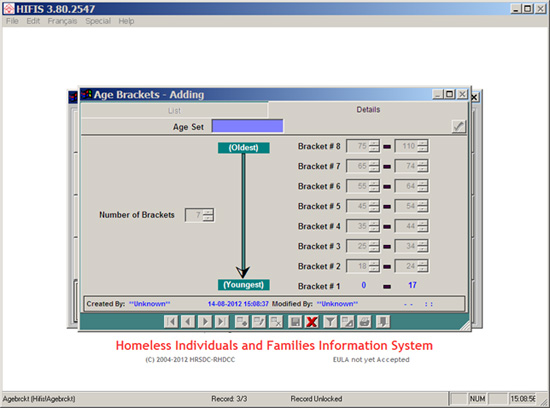