From Employment and Social Development Canada

The annual Shelter Capacity Report provides capacity statistics for emergency homeless shelters in Canada. The number of shelter facilities and the number of permanent beds are reported for each province and territory, as well as by community. In addition, brief overviews of Transitional Housing facilities and Violence Against Women shelters are provided in the appendices.

The information contained in this report was obtained from the National Service Provider List (NSPL), a comprehensive listing of homeless shelters in Canada. The NSPL is maintained by the Community Development and Homelessness Partnerships Directorate as part of the National Homelessness Information System (NHIS), a data development initiative that focuses on the collection and analysis of homeless shelter data in Canada.

Emergency shelters are defined as facilities providing temporary, short-term accommodation for homeless individuals and families. This may or may not include other services such as food, clothing or counselling.

Transitional housing provides temporary shelter, but can be differentiated from emergency shelters by the longer length of stay and greater intensity of support services offered to clients. Transitional housing is an intermediate step between emergency shelter and permanent housing. Support services help clients gain stability and self-sufficiency to maintain permanent housing. Stays are typically between three months and three years.

Violence against women (VAW) shelters are defined as facilities providing temporary shelter to single women or women with children fleeing domestic abuse. They may function in either a crisis capacity or as transitional or second-stage housing.

These numbers have remained relatively stable over the past five years. 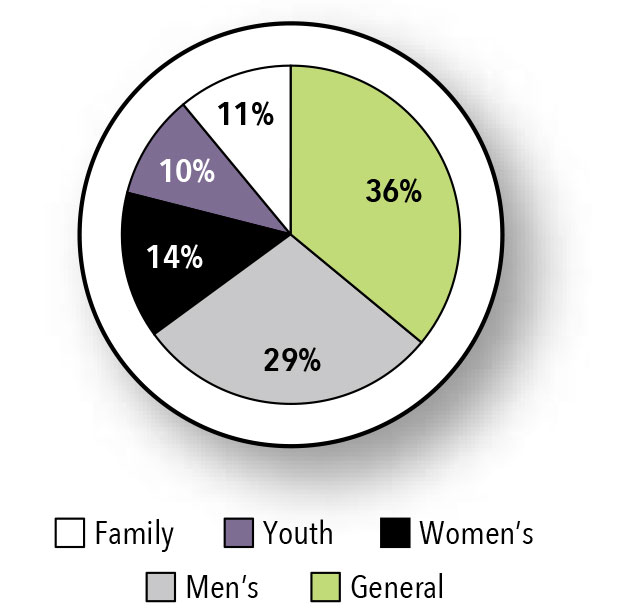 The majority of shelter beds (81%) are found in large cities. While smaller communities have fewer shelter beds, they still account for nearly half (41%) of all emergency shelters.

*Changes in the reported number of shelters and beds during the years 2013 to 2016 primarily reflect updated information rather than actual changes in national shelter capacity.

Appendix B: Violence against women shelters