Fact sheet on halocarbon regulations on federal and Aboriginal lands

What you need to know about the Federal Halocarbon Regulations, 2003 if you own or work with:

What are the Federal Halocarbon Regulations, 2003?

The Federal Halocarbon Regulations, 2003 (FHR 2003) were published on August 13, 2003, under the authority of the Canadian Environmental Protection Act, 1999 (CEPA 1999) as part of Canada's commitment to protect the Earth's ozone layer.

Environment Canada administers and enforces the FHR 2003. The purpose of the FHR 2003 is to reduce and prevent emissions of halocarbons into the environment from air-conditioning, refrigeration, fire-extinguishing and solvent systems, and from equipment associated with these systems, including storage containers. The FHR 2003 apply to those systems owned by Her Majesty in right of Canada, federal departments, agencies, boards, crown corporations, or federal works and undertakings, and those systems that are located on federal or Aboriginal lands.

How do the Federal Halocarbon Regulations, 2003 prevent and minimize releases of halocarbons?

Full text of the Federal Halocarbon Regulations, 2003 is available from the Department of Justice web site and Environment Canada's CEPA Environmental Registry.

Why are halocarbons controlled?

Emissions of halocarbons can lead to ozone depletion and contribute to climate change. Preventing halocarbon emissions provides a dual benefit for both ozone layer protection and the fight against climate change.

What is the impact of halocarbons?

The ozone layer is beneficial to life on Earth, as it absorbs harmful ultraviolet (UV) radiation from the sun. Halocarbons with chlorine or bromine cause ozone depletion, a decrease in the density of the ozone layer. As the ozone layer is depleted, increasing amounts of UV rays reach the Earth.

In addition to most halocarbons being ozone depleters, all halocarbons are greenhouse gases. Emissions of greenhouse gases due to human activities disrupt the natural balance of energy in the atmosphere and can significantly alter the climate on Earth.

What are the potential impacts of ozone depletion?

Ozone depletion may lead to:

A sustained 10 percent depletion of the ozone layer would lead to a 26 percent increase in non-melanoma skin cancer. This could mean an additional 300 000 cases per year worldwide.1

A sustained 10 percent thinning of the ozone layer would cause up to 1.75 million new cases of cataracts worldwide each year.1

Both humans and animals will experience an increase in skin cancers and cataracts.

Do the Federal Halocarbon Regulations, 2003 apply to your situation?

The following decision table will help you determine if the Federal Halocarbon Regulations, 2003 (FHR 2003) apply to your system(s). 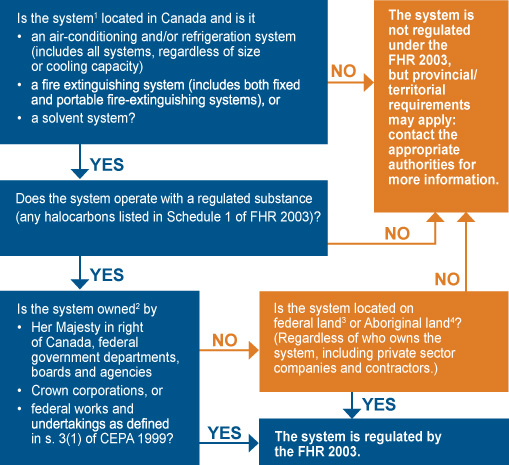 1. "system", unless the context requires otherwise, means an air-conditioning system, a fire-extinguishing system, a refrigeration system or a solvent system [including any associated equipment such as containers]. [FHR 2003]

2. "owner" means to hold a right in or to have possession, control or custody of, to be responsible for the maintenance, operation or management of, or to have the power to dispose of, a system. [FHR 2003]

4. "aboriginal land" means (a) reserves, surrendered lands and any other lands that are set apart for the use and benefit of a band and that are subject to the Indian Act; (b) land, including any water, that is subject to a comprehensive or specific claim agreement, or a self-government agreement, between the Government of Canada and aboriginal people where title remains with Her Majesty in right of Canada; and (c) air and all layers of the atmosphere above and the subsurface below land mentioned in paragraph (a) or (b). [CEPA 1999] determined under the Oceans Act, including

The FHR 2003 apply to all refrigeration, air-conditioning and fire-extinguishing systems, including their associated equipment and devices, that contain or are designed to contain a halocarbon. They also apply to solvent systems that use halocarbons as a solvent. The following table can be used as a reference for system descriptions when interpreting the FHR 2003.

What do I need to know to make sure I comply with the Federal Halocarbon Regulations, 2003?

You cannot release a halocarbon from a:

There are only a few circumstances where a release is not a violation, including: 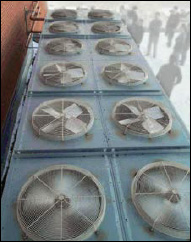 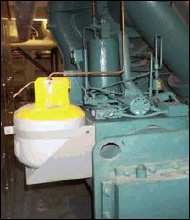 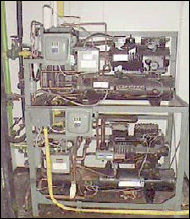 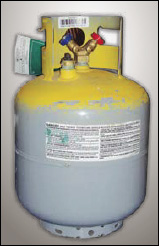 Requirements for refrigeration and air-conditioning systems

What do I do if I find a leak?

If a leak is detected:

Chlorofluorocarbons cannot be used to charge:

What do I do if I find a leak?

Halons cannot be used to charge a portable fire extinguisher or a fixed fire-extinguishing system.

Systems that are excluded from the charge prohibition include:

Unless authorized by a permit issued by Environment Canada, it is prohibited to install a refrigeration, air-conditioning or fire-extinguishing system that operates with a halocarbon other than HCFCs, HFCs and PFCs.

Please refer to the telephone numbers and mailing addresses for release reporting in this Guide (page 15), for where to call in a release report and where to submit written release reports. Release reports must include the information prescribed in Schedule 2 of the FHR 2003.

All logs, notices, records and reports must be kept for five years at the site where the system is located. If the system is located on a means of transportation or on unoccupied premises, the documentation may be kept at a single location occupied by the owner. Owners are also required to submit a report of their systems that are located on unoccupied sites to Environment Canada.

The information that must be included in the documentation is found in Schedule 2 of the FHR 2003. Examples of forms for notices, service logs and release reports can be obtained from Environment Canada.

Advice for when you are dealing with a contractor

When issuing a contract, ensure that the terms and conditions are clearly described.

For example, for refrigeration and air-conditioning service specify:

What does Environment Canada do to verify that individuals and organizations are complying with the Federal Halocarbon Regulations, 2003?

Environment Canada's enforcement officers undertake regular inspections in order to verify compliance with the requirements of CEPA 1999 and the FHR 2003. Investigations are also conducted when an enforcement officer has reasonable grounds to believe that a violation has occurred.

CEPA 1999 provides for measures ranging from a warning to imprisonment. The choice of the enforcement action is based on principles founded in law and framed by the criteria assessment defined in the Compliance and Enforcement Policy for the Canadian Environmental ProtectionAct, 1999.