Invasive exotic species are a huge threat to biodiversity. Often introduced both accidentally and intentionally by humans, they endanger the survival of indigenous species because they tend to crowd them out. Competition is fierce!

On your way back, keep an eye out for invasive species!

Also known as Mexican bamboo, this plant was introduced in North America at the end of the 1800s as an ornamental plant. In addition to growing very rapidly, it releases a toxin in the soil which prevents the growth of other plants. It is invading the banks of the Sutton River near the village at an alarming rate.

The larva from this small insect, a native of Asia, feeds on ash wood. Present in Quebec since 2008, it causes major damage along its path. If you notice this insect, a general yellowing of the leaves or D shaped marks on the trunk of an ash tree, please contact the Canadian Food Inspection Agency at 1-866-463-6017.

To prevent the spread of wood-boring insects, avoid transporting firewood from one region to another. 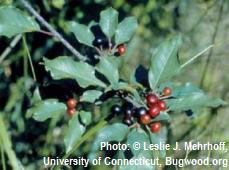 only when it is permitted.

This plant comes from Europe, western Asia and North Africa. It invades mostly wetlands. It is rarely attacked by pests, and the deep shadow created by its foliage hinders the growth of indigenous species.