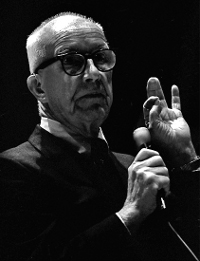 A self-taught inventor, engineer and architect, Richard Buckminster Fuller (1895-1983) holds a unique place in the history of contemporary American architecture. His avant-garde philosophy can be summed up as seeking maximum efficiency for minimum effort. He began his career in the 1920s, advocating a strictly functionalist approach devoid of all aesthetic concerns. However, through his research, based on good technical knowledge, empirical methodology and observation of nature, he developed architectural notions in which utilitarianism led to an economy of means and a purity of form that were by no means lacking in beauty.

To Respect the Planet

Long before society was concerned with a global vision and environmental protection, Fuller spoke of interrelationships, synergy and integrated functions and wondered how we could make the best use of our technology while improving humanity. Already in the early 1960s, he predicted that the survival of humankind would be compromised unless we stopped wasting the earth’s natural resources. Fuller said that the world was the sum of all human experience, an accumulation of each person’s experience. The parallel with Oriental philosophies is striking. Seen from this point of view, the mystical character of Fuller’s approach becomes clear. Fuller wrote that the goal of his research was to view the universe as an organization of regenerative principles. This is the very basis of life, with references to rebirth, reproduction and, in architectural language, to the notions of space, cycles, orbits and cells. His ideas found their expression in forms such as the egg, ball, sphere and geodesic dome.

The Triangle: A Perfect Form

Built from triangles, which Buckminster Fuller considered the perfect form, the Biosphere is the synthesis of his entire process: he demonstrated that it was possible to create a liveable space using only one-fiftieth of the materials normally used in a conventional architectural design. The triangle is a natural mathematical figure that, in combination with other triangles, provides maximum efficiency with minimum structural effort. By assembling a series of identical geometrical units that are both self-supporting and light, Fuller obtained a dynamic construction in which the individual components contribute to the overall structure. While each component is independent, it cannot exist without the others.

Buckminster Fuller’s first geodesic dome, 18 metres in diameter, was built on The Dome Restaurant in Woods Hole, Massachussetts, in 1952. The technical problems encountered - leaks, the difficulty of controlling indoor temperatures in bright sunlight, the fragility of the outer covering, and high ambient noise levels - were hardly surprising given the novelty of the structure, but slowed down the development of this type of construction. The experience was nevertheless considered conclusive enough for Buckminster Fuller to move on to the construction of larger domes. The Dome Restaurant’s hemispherical structure, composed of triangular plastic elements fixed to aluminium struts, laid down the basic principles that he refined in the years that followed. A striking demonstration of the soundness and quality of Buckminster Fuller’s ideas came in the spring of 1953, with the construction in just a few weeks of the Ford Dome above the central atrium of the Ford Motor Company’s cylindrical head office building in Dearborn, on the outskirts of Detroit, Michigan. The 8.5-tonne dome, with a diameter of 83 metres, was in fact the only structure capable of covering the vast central space without placing too much pressure on the walls of a building that had not originally been designed to accommodate such an addition. World media attention to the construction and inauguration of the dome popularized the theories of “Bucky,” as he came to be known. In short, when he approached the American government in 1963 to design the U.S. pavilion for Montréal’s World Fair in 1967, Buckminster Fuller had become a star. Geodesic domes are the most efficient structures ever created in terms of material weight. Their main quality is that they distribute tension and stress economically throughout the construction, by channeling it in different directions. The larger the dome, the more resistant it becomes, because of the synergetic forces at work. However, the domes also have a number of drawbacks; for example, they are not suitable for highly urbanized environments and are practically impossible to extend. Also, given the dynamics of indoor air circulation, they require major fire prevention installations and excellent ventilation systems. Ambient noise can also generate problems. On the other hand, the domes provide an ideal solution in some environments because of their solidity and light weight.

The Sensation of Expo 67

The America pavilion, as high as a 20-storey building, soon became the focal point on the Île Sainte-Hélène site. Within six months it was visited by more than 9 million people, making it one of the busiest pavilions at Expo 67. Its six inner floors were based on the theme “Creative America” and contained several hundred artifacts and works of art bearing witness to American genius - even some of the space rockets actually used in the Apollo program! Nevertheless, everyone agreed that the highlight of the presentation was the building itself. The huge sphere, with a diameter of more than 80 metres, was imposing from the outside but discreet from the inside. At night, it was transformed into a sparkling jewel that dominated the landscape. In 1967, Buckminster Fuller dedicated the dome to his wife Anne in celebration of their 50th wedding anniversary and dedicated the dome to his wife Anne when they visited the site in April of that year.

The geometrical form used to construct the Biosphere is the icosahedron - in other words, a mass with 20 faces composed of identical equilateral triangles. Each of the 20 faces is subdivided into a number of smaller triangles with slightly modified angles, to obtain a curved surface which gives the finished structure a spherical form rather than an angular form. The edges of the triangles are made up of 9 cm diameter metal tubes.The structure is a three - dimensional lattice measuring slightly over one-metre thick at its base, and narrowing gradually towards the summit. It is built on a reinforced concrete foundation fixed to a rock base. At first glance, the structure seems to be composed exclusively of hexagonal (six-sided) honeycomb cells arranged side by side. However, closer examination reveals the presence of six pentagonal (five-sided) components, one at the top of the dome and the five others placed at equal distances around the upper third of the structure. The pentagons are the only remaining traces of the 12 angle points of the original icosahedron. The pavilion was originally designed to be dismantled. However, for reasons of economy, the American officials asked for the metal tubes to be welded, not bolted as Buckminster Fuller had proposed. This change slowed down the building process considerably, and also - fortunately for Montréal - made the structure impossible to dismantle. As a result, President Lyndon B. Johnson gave it to the City of Montréal in 1967.The structure was covered by a transparent outer shell composed of tinted acrylic panels. In 1968, the U.S. pavilion received a Design Award from the American Institute of Architects. The jury compared the spatial effect of the platforms, which seemed to float in the air, to a weightless sensation, entirely in keeping with the experiences of the first flights into space. The interior was skillfully integrated with the sphere’s frame. The architectural quality of the building resides not only in the technical feat of the structure, but also in the link between the frame and its contents.

This way of thinking - globally and ecologically before those terms had even been coined - inspired Environment Canada and the City of Montréal to set up the Biosphere. Despite its undeniable advantages - its lightweight structure, strength and elegance - Buckminster Fuller’s dome was not suited to the Canadian climate. Inside, it was practically impossible to heat and the wide seasonal variations in temperature caused the metal tubes and acrylic outer panels to expand and contract considerably. Leaks were common. In fact, it was a welding operation during the maintenance of the outer covering, on May 20, 1976, that caused the spectacular fire which destroyed the entire acrylic shell in just half an hour, although the structure itself remained intact. After the fire, the dome was more or less abandoned for fifteen years, but was literally reborn from its ashes with the beginning of restoration work in 1992. The Canadian government, with the City of Montréal, invested $17.5 million to construct a unique museum and environmental observation centre dedicated to water, the St. Lawrence and Great Lakes ecosystem, and sustainable development. Quebec engineers and architects Blouin, Faucher, Aubertin, Brodeur, Gauthier, along with Desnoyer, Mercure et Associés architects, completely redesigned the layout of the dome to suit its new vocation. For financial reasons, it was decided to restore the structure but not to replace the acrylic covering because of the cost of heating and air conditioning the vast inner space. The steel tubes were treated with anti-corrosive paint to protect them from the elements. A new building was erected inside the dome, incorporating three of the American pavilion’s four original platforms. The Biosphere opened on June 5, 1995, World Environment Day, and became Canada’s first Ecowatch Centre. The building was a hit with the critics right from the start. It received the 1995 Award for Excellence from the Ordre des architectes du Québec in the Architectural Conservation category.