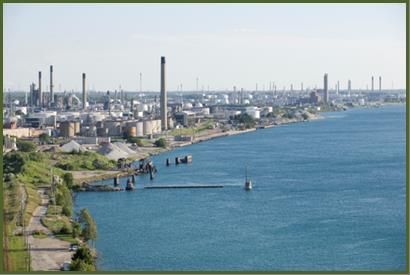 A milestone has been met in efforts to reduce the long-standing risks associated with contaminated sediments in the St. Clair River, through a project supported by the Great Lakes Sustainability Fund.

The St. Clair River Area of Concern is one of five international Areas on the Great Lakes where remediation action plans are shared by Canada and the United States. The river supports extensive recreational activities, including sport fishing, boating and swimming, and is a source of drinking water for shoreline communities. Sediments contaminated by past industrial discharges along the shore have impacted the aquatic environment of the river. Restrictions on consumption of some sportfish species - particularly walleye, smallmouth bass and yellow perch - have been imposed due to elevated levels of mercury as well as PCBs. The remediation of three remaining areas of contaminated sediment in the river is a priority and a key component of the overall restoration plan.

An engineering report on sediment management options, commissioned by the Project partners, concluded that the priority risk is mercury-contaminated sediments along a nine-kilometre section of the river adjacent to the Sarnia industrial area. Mercury is toxic and can be ingested by small organisms, called benthos, that live in or on the river bottom and that are a food source for many fish. When fish eat mercury-contaminated benthic organisms, the concentration of mercury in species higher up in the food chain can increase. This “bio-magnification” process results in large predator fish having higher concentrations of mercury than initially found in the benthic organisms. The Sediment Management Options Report identified three options for managing the contaminated sediments in the St. Clair River to reduce the threat of these remaining contaminated areas to the river’s aquatic environment:

1.      isolation capping, where contaminated soils are covered by a permanent barrier;

2.      hydraulic dredging, where the contaminated soils are removed; and,

3.      hydraulic dredging with a thin layer backfill, which involves the addition of a covering layer after the soils are removed.

In 2012 and 2013, all parties with an interest in the future of the St. Clair River - community residents, First Nations, local governments and industry - had a chance to review these three options, ask questions and provide feedback. Open houses were held in smaller communities along the river, followed by a wrap-up meeting in Sarnia to address questions that had been raised. About 100 residents participated in the public sessions.

In the next phase of work, the Project partners will select a preferred option for containing the sediments, based on the results from the consultations.