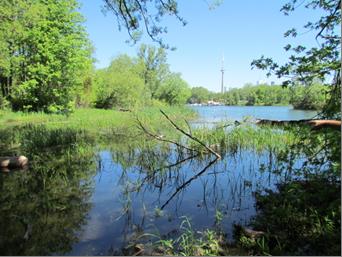 Other Project Contributors: Toronto and Region Conservation Authority; the City of Toronto; Waterfront Toronto; the Ontario Ministry of Natural Resources; Fisheries and Oceans Canada; and the Toronto Port Authority.

A new one-hectare wetland constructed on the Toronto Islands with the help of the Great Lakes Sustainability Fund is the first step in an innovative plan to lever the restoration of many more hectares of wetland and aquatic habitat along the city’s Lake Ontario shoreline and river estuaries.

More than 200 years of agricultural and urban development have dramatically changed the waterfront of what is now Canada’s most densely urbanized area. An estimated 680 hectares of coastal wetlands - prime fish and wildlife habitat - have been lost in the Toronto region, resulting in widespread losses in the abundance and diversity of aquatic species. But the problems are not just in the past - ongoing rapid urbanization along Toronto’s waterfront continues to fragment and isolate wetland and aquatic habitat.

That’s where the Toronto Island Wetland Implementation Project comes in. The Project is working towards the longer term goal, set out in the Toronto area’s Remedial Action Plan, of creating about 75 hectares of new wetland habitat.

In 2012, the third of three small, isolated wetlands on the Toronto Islands was excavated and connected to the other two to create a single wetland area around existing mature vegetation. Additional vegetation was planted along the shoreline and aquatic vegetation was planted using seeds of plants native to the area. The result is new and restored spawning, nursery and feeding habitat for both cool and warmwater fish species in the Toronto harbour region, including northern pike, largemouth bass and smallmouth bass, as well as habitat for amphibians, reptiles and birds.

The Project also represents the start of a sustainable “fish habitat bank” for the Toronto waterfront and harbour. Under the federal Fisheries Act, proponents whose projects could affect fish and fish habitat are required to offset any unavoidable loss of habitat. With a “habitat bank,” prime habitat is created in advance - “banked” - in anticipation of the impacts of future projects. Developers then have the option of purchasing credits from the habitat bank. In this way, the bank can support the creation of priority habitat while meeting the needs of future development.

The Project is one initiative under the Toronto Waterfront Aquatic Habitat Restoration Strategy, established by the federal, provincial and city governments to create an ecologically diverse and healthy waterfront and harbour area.