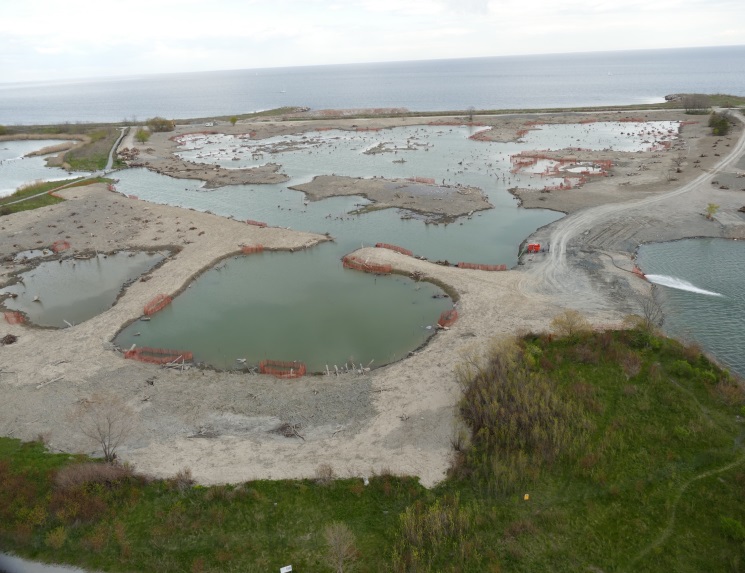 A disposal site for contaminated sediments is being converted into prime wetland on the Toronto waterfront, through a project supported by the Great Lakes Sustainability Fund.

The transformation from disposal site to wetland is expected to be completed by Spring 2018. The restored 9.3-hectare marsh ecosystem will provide critical reproductive, nursery, foraging and overwintering habitat for fish and wildlife at the Tommy Thompson Park at the foot of Leslie Street. The park, extending five kilometers into Lake Ontario, provides an outstanding opportunity to re-establish coastal wetland habitat that once flourished along the Toronto shoreline prior to the settlement and development of the city. In the early 1900’s, for example, Ashbridges Bay Marsh was filled and the mouth of the Don River straightened to create what is now the Portlands. The loss of this large 428-hectare coastal wetland ecosystem and the development of Toronto Harbour severely impacted fish and wildlife populations in the area.

This will be the second disposal site to be restored at the park. Three such sites, known as confined disposal facilities, were established to dispose of contaminated sediments dredged from the Don River, the Keating Channel and the Inner Harbour. Restoration of the first facility, completed in 2005, created about 7.7-hectares of aquatic habitat and wetlands.

Restoration work at the second site began in 2014. The first step was to cover and isolate the contaminated sediment with about a half-metre of clay. The site was then contoured using native soils.

Several design features are now being added to create a new diverse and healthy marsh ecosystem. For example, underwater shoals built from various sizes of rocks and gravel will be placed in the marsh to provide spawning opportunities for fish. Logs, boulders, and root stumps will be submerged to provide shelter, nursery grounds and foraging habitat for invertebrates, amphibians and fish. Deepwater pockets will be created in the lake bottom to offer overwintering habitat for fish, amphibians and turtles, while rocks above the waterline will provide resting and forging opportunities for birds and turtles. A shallow sandy beach in a sheltered cove of the cell will provide habitat for aquatic invertebrates, migrating shorebirds and turtles. Bird boxes will be installed to improve nesting opportunities for Wood Duck and other species. Two small islands will provide nesting habitat for the Common Tern population. In addition, one of the access roads alongside the site will be converted to a vegetated berm to provide isolated shallow and deep water habitat for amphibians.

The work on the former disposal site is part of a comprehensive habitat restoration effort under the Toronto Waterfront Aquatic Habitat Restoration Strategy. The strategy, developed by the Toronto Regional Conservation Authority and its partners, aims to create and restore aquatic habitat to improve fish and wildlife populations and to promote more environmentally friendly urban spaces - to make Toronto a “Living City.”