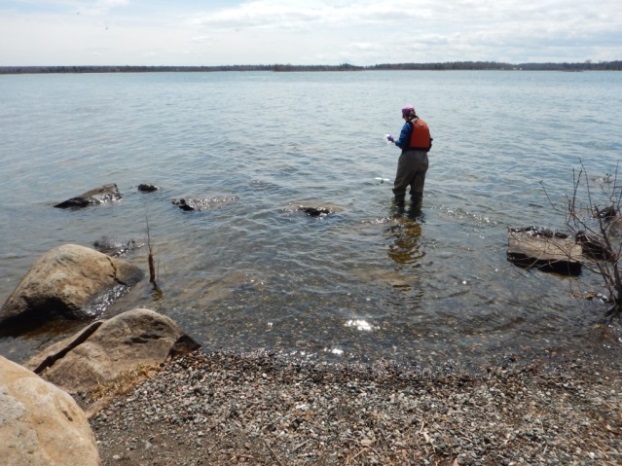 New data on water quality in the St. Marys River, collected with the support of the Great Lakes Sustainability Fund, are helping build the case for meeting two key environmental cleanup objectives for the Area of Concern.

That conclusion would represent an important milestone: these would be the first two of the Remedial Action Plan’s nine environmental cleanup objectives to be met.

The St. Marys River is a 112-kilometre channel that flows from Lake Superior into the North Channel of Lake Huron. In the past, environmental concerns have focused on water quality and environmental health arising from historical pollution in the Sault Ste. Marie area from local industries and discharges from storm sewers and wastewater treatment plants. Two specific environmental concerns identified in the Area of Concern’s Remedial Action Plan were related to eutrophication and algae and aesthetics.

While there is general agreement in the area that the problems of algae growth and visual pollution in the river are no longer present, monitoring data are needed to provide the conclusive evidence. United States authorities recently carried out water quality surveys. They found considerable improvement to the river’s aesthetics and determined there was no impairment. Canada needed to carry out comparable monitoring to confirm these findings.

Researchers from Algoma University were engaged to carry out a three-year monitoring study. They established five sampling locations along the river, from Gros Cap to St. Joseph Island. At each location, they collected water samples, and recorded and photographed observations regarding the river's odour, clarity and colour, and any incidence of visible sheens, algae growth and floating algae mats.

Field work ended in the summer of 2015, and the project’s final conclusions and recommendations are expected to be presented in the Fall of 2016.

Preliminary analysis of the monitoring data suggests that the conditions that originally led to the beneficial uses being designated as impaired no longer exist. In particular, there was no evidence of oxygen stress, large quantities of algae, or high levels of nutrients typically found in eutrophic waters (that is, waters rich in nutrients that promote a proliferation of algae and plant growth, resulting in a depletion of oxygen supply for fish). In addition, there was an absence of characteristics associated with degraded aesthetics, such as unnatural water colour, clarity, or odour.

The Area of Concern’s Binational Public Advisory Council has been engaged with the project from the start. Council members provided input at the project design stage and feedback on preliminary findings.