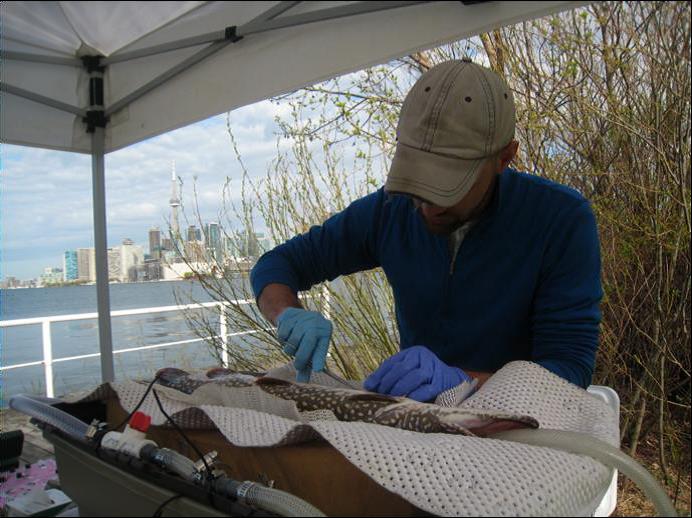 Other Project Contributors: Toronto and Region Conservation Authority; Carleton University; Fisheries and Oceans Canada; the Natural Science and Engineering Research Council; and the Ontario Ministry of Research and Innovation.

Habitat managers are “listening in” on the lives of several hundred fish in the Toronto harbor, under a project supported by the Great Lakes Sustainability Fund.

Using fish acoustic telemetry - where the movements of individual fish are tracked by means of sound waves from implanted transmitters - the Project is providing extensive data on where different species spawn and feed, where they take refuge and where they overwinter. With this knowledge, habitat managers will be able to better target efforts to create and restore habitat for native fish populations, a key part of the broader goal of restoring the Toronto and Region Area of Concern. The information gained from the Project also will be applied to other Areas of Concern in the Great Lakes, where, as in Toronto, past activities such as industrialization and agriculture have led to widespread losses of coastal wetlands and other fish habitat.

Under the Project, small transmitters have been implanted in more than 300 fish over the last two years. Signals are picked up by a series of 36 receivers positioned on the lakebed throughout the harbor. The Project is expected to continue collecting data at least until 2015.

The Project initially focused on two important native sportfish, largemouth bass and northern pike, as well as the non-native common carp, which can damage habitat used by other species. In its second year, the Project added a small number of walleye, a popular sportfish native to the Toronto harbor area, to the list of fish being tracked.