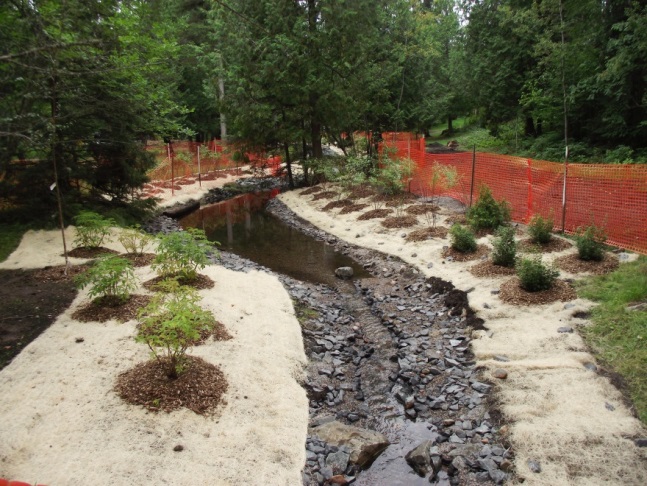 An underwater video of a small creek in Thunder Bay is offering proof that schools of brook trout are once again thriving in the creek, thanks to a habitat restoration project undertaken with the support of the Great Lakes Sustainability Fund.

George Creek is a small, groundwater-fed tributary of the Current River, which enters Lake Superior in the north end of the city. The creek originates in and flows through the city’s Centennial Park. When the park was constructed in the 1960s, fish habitat in the creek was degraded as the result of dredging, channel modifications and the removal of shoreline vegetation.

In 2013, work under the project focused on re-establishing about 100 metres of more natural channel in the creek and enhancing habitat for brook trout. Fish habitat features were installed, including the addition of coarse woody debris and pools. Native trees, shrubs, and other small plants were planted to increase shade and provide protection for juvenile brook trout. The trout need this type of nursery habitat to survive warm summer months and avoid predators until they are large enough to return to the Current River.

In 2014, the project addressed the need to improve fish passage to the newly created habitat in the creek. Natural meanders and a series of step pools were added to reduce the slope and velocity of the stream. As well, a narrow culvert was replaced with a wooden bridge, allowing for easier passage by fish and providing valuable cover over new habitat created under the bridge.

Public outreach has been a core component of the project, helping to build community awareness of the impacts of development on urban waterways and showcase the environmental benefits of stream rehabilitation and naturalization. More than 30 dedicated community volunteers worked on all steps of the project. In addition to the underwater video, public information activities included the installation of interpretive panels along a walking trail near the creek describing the importance of protecting fish habitat and the goals of the George Creek restoration work.

For more information on the Thunder Bay Area of Concern, please visit: InfoSuperior.