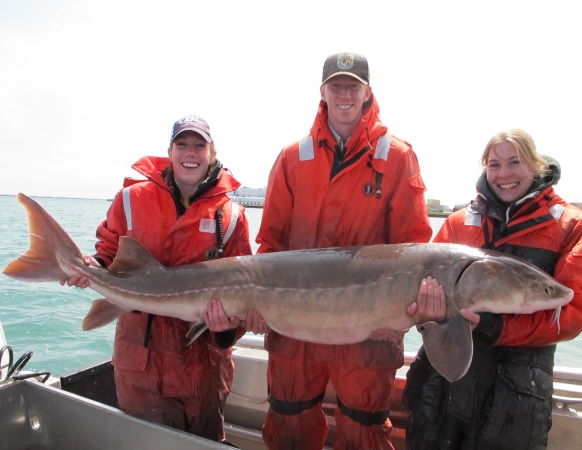 An “ancient fish” species - once common in the Great Lakes but now at risk - is making a gradual recovery, thanks to an award-winning construction of an artificial limestone reef in the Detroit River supported by the Great Lakes Sustainability Fund.

Lake sturgeon, which can grow up to 2.4 metres and 135 kilograms, are members of an ancient family of fishes that dates back to the Upper Cretaceous period 136 million years ago, a time when dinosaurs were at the height of their development. Population levels of lake sturgeon in the Great Lakes have declined sharply over the last century through over-fishing and loss of habitat from urban and industrial development. Today, the lake sturgeon is listed as Threatened under both Ontario and Canadian species at risk legislation. Restoring critical habitats for lake sturgeon and other fish is a key task under the Area of Concern’s Remedial Action Plan.

Thanks to long-term research and habitat restoration work by Canadian and American agencies, lake sturgeon, and other key species such as lake whitefish and walleye, have started spawning again in the Detroit River. However, if sustainable population levels of the species in the Great Lakes are to be achieved, additional spawning habitat in the flowing waters of rivers must be established.  Scientists have determined the types and sizes of rocks that best support the capture and survival of sturgeon eggs along the riverbed. Only a few locations in the Detroit River meet these criteria.

Using these findings, scientists focused on the northeastern side of Fighting Island, just downriver from the City of Windsor. They created a new artificial reef made of limestone that had been broken up and crushed to small blocks. These blocks were placed at a minimum thickness of .7 metres downstream of an existing natural reef, parallel to the shoreline. The expanded fish spawning reefs now total nearly one hectare in area.

Early results have been encouraging - lake sturgeon began spawning on the underwater reef soon after the limestone rocks were set in place. In recognition of this achievement, the project received a prestigious United States Department of the Interior Partners in Conservation award in 2013.