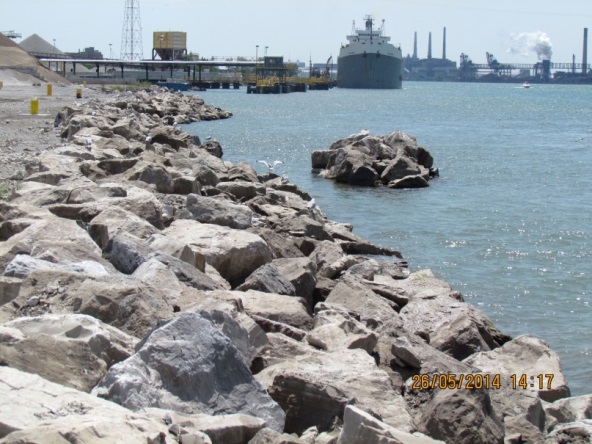 Fish and wildlife are returning to a restored shoreline in the industrial corridor of the Detroit River, through a project supported by the Great Lakes Sustainability Fund.

The project represents the most significant partnership to date with industry in the Detroit Area of Concern, one of five Areas of Concern shared between Canada and the United States. A large portion of the Detroit River shoreline is made up of industrial properties. Cooperation with the companies owning and operating these sites is vital to efforts to protect and enhance habitat, protect shorelines from erosion and reduce the discharge of solids into the Detroit River.

The project site is owned by the Windsor Port Authority and fronts about 360 metres of the Detroit River just downriver from the Ambassador Bridge linking downtown Windsor, ON and Detroit, MI. The site is leased by a bulk products company and is used as a storage and handling facility for sand and gravel unloaded from ships. Prior to the project, the property’s shoreline was unstable and slumping. Cracks and gullies led to extensive erosion, with sand and gravel entering into the Detroit River, damaging fish and wildlife habitat.

With the active cooperation of the Port Authority and the company, the project has given the shoreline a new, more natural look. First, the old riverbank was excavated to create a more winding shoreline. Next, a thin layer of a permeable woven fabric was placed on the entire slope to reinforce the slope and promote better drainage so as to prevent erosion. Then a layer of heavy stones, called gabion stones, was placed over the fabric to a depth of about .3 metres. Finally, more than 2,500 metric tonnes of larger boulders were set down over the prepared shoreline, and several rocky outcrops were created a few metres offshore.

The new meandering, rocky shoreline now provides many small spaces for young fish to seek shelter. The large boulders along the shoreline and the rocky “islands” improve cover and habitat structure for fish. Gulls and egrets also are using the site again. There even has been a sighting of a coyote on the property - a sure sign that wildlife has returned.

This project builds on earlier improvements to fish habitat made on the adjacent industrial property shoreline, where woody vegetation cover has been established along an unused boat slip.