The four main events for the season were:

Hurricane Irene had the greatest impact on Canadian forecast territory, bringing gusty winds and heavy rainfall and creating numerous problems in Quebec. Rivers flooded and many roads and bridges were damaged. Strong winds broke tree branches, causing interruptions to electrical service.  Katia was primarily a wave event, creating spectacular ocean swells along the Atlantic Coast of Nova Scotia.  Maria and Ophelia took direct aim on Newfoundland, but did not cause significant issues and were much less severe than Hurricane Igor of the previous year.

Following below is a summary of the four main tropical events that affected Canadian territory in 2011, which accounted for 85% of CHC’s forecast statements for the season.  The remaining statements were issued for weaker storms, including nine issued for Tropical Storm Gert in mid-September, a storm that dissipated without affecting the Canadian marine forecast district. 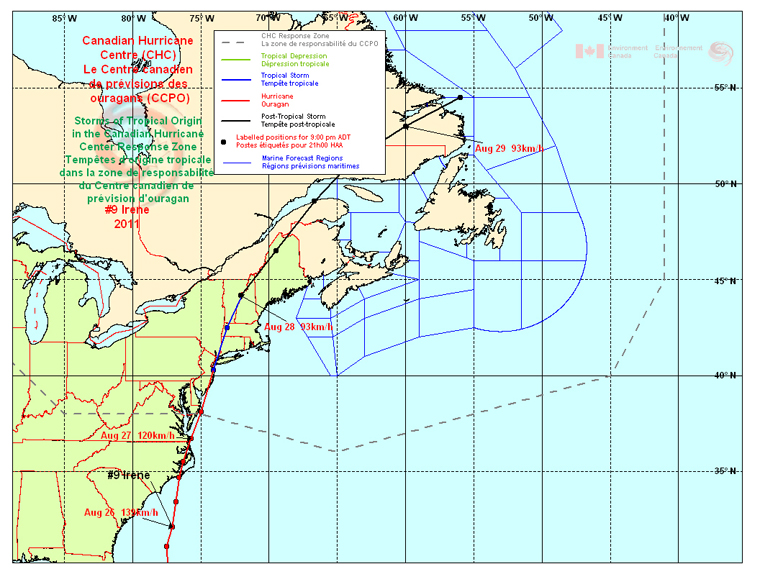 Hurricane Irene made two U.S. landfalls - the first in North Carolina and the second over western Long Island near New York City.  Irene was a very large and damaging storm affecting a large population of the eastern U.S.  The storm weakened to tropical storm strength quickly after landfall and underwent transition to post-tropical over northern New Hampshire on August 29th.  The centre of the low then tracked along the Quebec/Maine border, north of the Gaspé region of Quebec and into Labrador.  As Irene underwent transition to an extratropical storm, a sharp warm front formed over the St. Lawrence River valley, enhancing wind and precipitation in that region.

The heaviest rainfall from Irene in Canada was experienced in southern Quebec where 150 mm fell in the hilly Charlevoix region on the north side of the St. Lawrence River.   Montreal received near 65 mm of rain, most of which fell over a five-hour period on August 28th.  Up to 90 mm of rain fell east of the storm track over northern New Brunswick.  Generally less than 25 mm fell over Nova Scotia.  The strongest winds blew from the northeast along the St. Lawrence River southwestward to Montreal where gusts were near 80 km/h.  These winds were associated with the warm front north of Irene and exceeded 100 km/h at a few exposed island locations.  East of the storm track winds gusted to near 90 km/h over the Maritime Provinces.  These winds generated choppy conditions in local harbours around the region.

Parts of southern Quebec experienced flooding, resulting in road washouts and causing one direct fatality when a vehicle was swept into a river northeast of Montreal after a large culvert collapsed beneath the road.  Winds brought down several trees in Quebec and New Brunswick leaving tens of thousands of people without electricity.  Rough seas and some large waves caused minor problems along the coast.  In southern New Brunswick, waves spread rocks and other debris across a road near a pop ular beach. 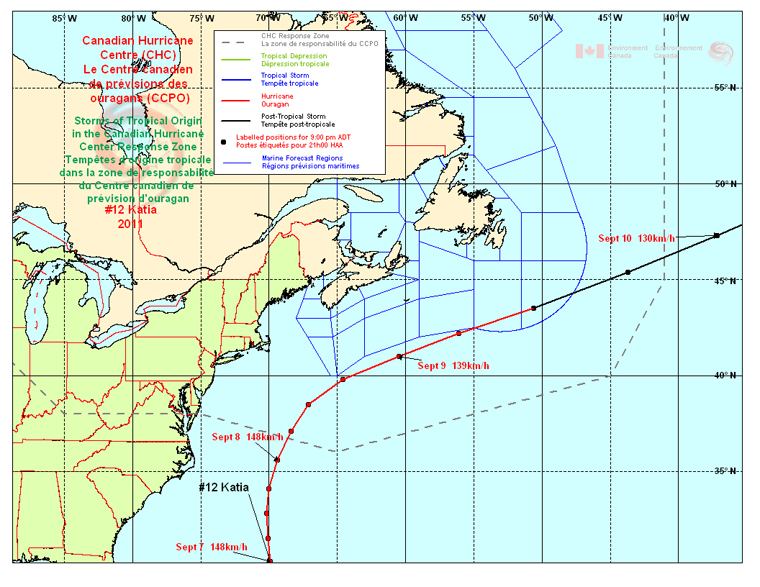 Although Katia’s cloud shield shrouded much of the Atlantic Provinces, the precipitation stayed well offshore.  Rainfall at Sable Island (about 300 km north of Katia’s center) was only 20 mm but totals between 60 and 120 mm would have been likely had the center tracked over land.

Offshore waters south of the Atlantic Provinces were hardest hit with peak waves above 10 metres. The Atlantic coast of Nova Scotia experienced heavy surf on Friday, September 9th and the next day these conditions spread to the south coast of Newfoundland.

The only known land impact was minor wash-up of debris from large waves travelling north of the hurricane.  At least one incident was reported along the south shore of Nova Scotia when someone was caught up in rip currents at a local beach. 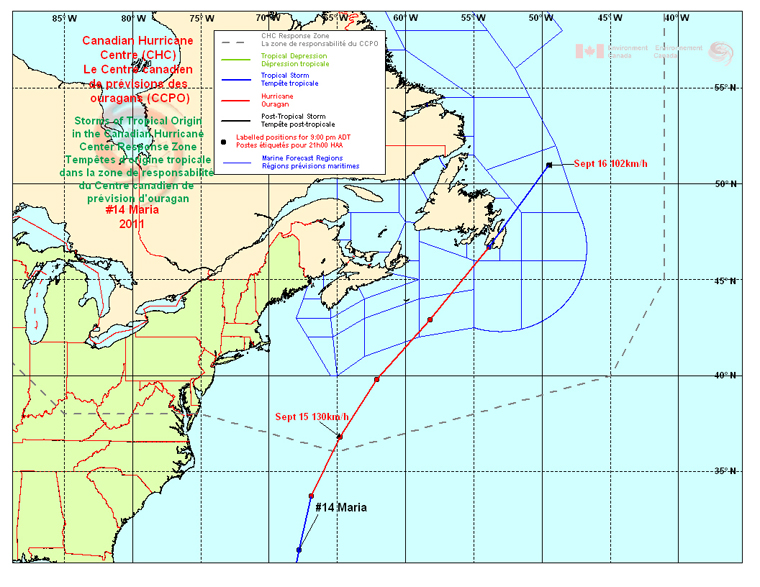 Maria formed on September 7th in the mid-tropical Atlantic and tracked westward and then northwestward, skirting the Caribbean Islands from September 10th to 12th.  While still a tropical storm Maria moved northward to the west of Bermuda and attained hurricane status on September 15th at 35oN latitude.  Hurricane Maria then accelerated toward the northeast, making landfall in Newfoundland on the afternoon of September 16th as a strong tropical storm in the Cape St. Mary’s/Argentia area of the Avalon Peninsula.  After transiting to a post-tropical storm while leaving Newfoundland, Maria merged with a large non-tropical low that had been intensifying over southeastern Labrador.  The combined low was actually a more potent storm for northern Newfoundland and Labrador on September 17th.

The central pressure of Maria at landfall was estimated to be 985 millibars and the storm’s strongest winds were to the right of its track.  At landfall the highest winds were located far enough from the storm’s center that they did not pass over land.  The maximum wind jet was just offshore, to the east of the Avalon Peninsula.  The remnant eye of Maria covered most of Placentia Bay and up into the Clarenville area of the province just prior to nightfall.  Winds were observed diminishing to light as the storm’s eye passed with partially clearing skies, followed by a modest increase in wind speed and returning cloud cover after the center moved away.

This storm was a very close call for eastern Newfoundland.  Offshore winds blew at hurricane force for at least two hours about 180 km east of the storm track.  Satellite imagery indicated that the radius of maximum wind tracked about 50 km east of Cape Spear - the island’s most easterly point of land.  Storm surge was not a threat, due to the fast motion of Maria and the limited time for water to build up in the bays.

Impacts from Maria were quite minor, since the highest winds remained offshore.  There were only a few reports of light objects being blown around.  Surprisingly there were no interruptions to the power grid considering that Maria was a near hurricane-strength storm that made landfall. 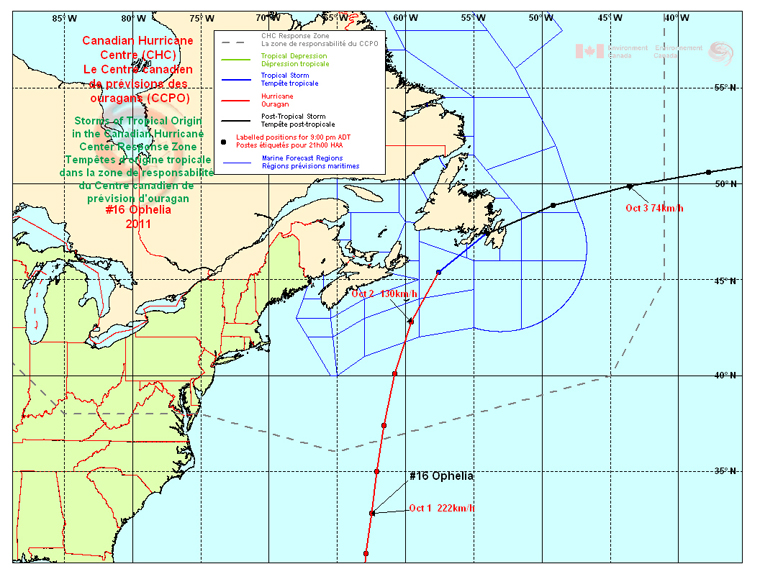 Ophelia formed in the mid tropical Atlantic on September 21st and tracked northwestward as a tropical storm over the following week.  It was not until September 30th when Ophelia began to move on a more northerly course that it strengthened to hurricane strength.  In fact, Ophelia rapidly intensified from tropical storm strength to category-3 intensity in 24 hours.  The storm intensified further to a 940-mb category-4 hurricane while tracking northeast of Bermuda on October 2nd.  The compact hurricane entered the CHC Response Zone as a strong category-3, and then rapidly weakened as it travelled over cooler ocean water temperatures.  The weakening occurred quickly enough so that Ophelia dropped below hurricane strength as it made landfall on the Avalon Peninsula of Newfoundland near the community of Placentia.  The storm centre appeared to reform approximately 50 km north of landfall, and then tracked north of the capital city of St. John’s.

The central pressure of Ophelia was estimated to be 988 millibars at landfall.  Maximum winds at landfall were near 55 or 60 kts (100-110 km/h) about 50 km offshore.  Wind gusts to 100 km/h were reported along the immediate southern coastlines of the Avalon and Burin Peninsulas, with inland gusts near 80 km/h reported.  These wind speeds are not unusual for Newfoundland.  Winds noticeably diminished as the centre of the storm passed through, then increased from the west, gusting to near 90 km/h after the storm core moved away.  Rainfall was light near the center of the storm and to its right, as is typical for extratropical transition.  Not far to the left of the track, heavy rainfall came quickly - amounting to near 50 mm in three hours.

In the offshore region, maximum winds extended from the Laurentian Fan forecast district to the northern Grand Banks.  The large waves generated by these winds propagated northward reaching the coast of the Avalon region with heights of five to ten metres.  Like Maria, two-and-a-half weeks earlier, storm surge was not a significant factor.  The highest reading from a tide gauge was 50 cm at Argentia, which occurred at low tide.

Impacts from Ophelia primarily came in the form of flooding due to rainfall.  The Burin Peninsula was the region most affected by heavy downpours and was also hit hard during Hurricane Igor the previous year.  A drainage ravine overflowed in the town of Belleoram, sending a cascade of rocks, mud and water into homes, causing heavy damage to a couple of buildings.  A large culvert was unearthed by the heavy water flow from Ophelia.  The same location was the site of a major washout the previous year from Hurricane Igor. A brief state of emergency was declared in the community.

Curious spectators attracted by the large ocean swell along the southern coastlines were encouraged to stay away from dangerous surf and rip tides in the wave-breaking zones.  Debris washed up on the beachfront and the causeway in the community of Saint Vincent’s with similar effects reported in other areas of the southern Avalon Peninsula.