Build your own anemometer

An anemometer measures the speed of the wind. You can make one easily with a ping pong ball and the protractor from your math set. 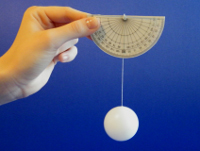 Cut a piece of thread about 20 centimetres long. Thread the needle and tie a large knot in the end of the thread.

Stick the needle into one side of the ping pong ball and out the opposite side. Draw the thread through until the knot at the other end stops the thread from moving.

Take the protractor outside. Hold it level and parallel to the wind. The wind will blow the ball and when it does, note the position of the thread on the protractor. Record the angle that the ball has been blown and use the chart to convert the angle to a wind speed.

Other games and activities