Clouds form in the atmosphere that surrounds the Earth the way a leather cover surrounds a baseball. Clouds can be an excellent clue to what's happening in the atmosphere above us. Smooth even-textured layer clouds mean the air is relatively tranquil with little up and down movement within the cloud. On the other hand, those lumpy bumpy clouds that rise into cauliflower towers are shaped that way by turbulent air currents rising and eddying within the cloud. Cloud types, how quickly they form, and where they move are all clues to approaching changes in the weather.

The air closest to the Earth is warmer and more moist than the air higher in the atmosphere. Clouds form when that warm layer of air is forced to cool down, causing the water vapour in it to condense into tiny droplets or--if it's cold enough--ice crystals. Clouds can be made of these small water droplets, ice crystals, or sometimes both at the same time, depending on the temperature inside the cloud. All clouds belong to one of 4 "families"--they are either low clouds, middle clouds, high clouds, or convective clouds. The first 3 types are determined by the height of their bottoms above ground, and convective clouds are named after the process that formed them … convection. 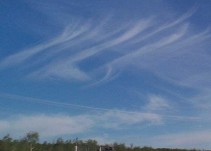 Low clouds form close to the Earth, with their bases up to 2 km above the ground. Middle cloud bases are generally between 2 km and 6 km above the ground. High clouds range from 6 to 12 km, higher in the atmosphere where temperatures are generally colder--for that reason, high clouds are almost always composed entirely of ice crystals. The bases of convective clouds can be in either the low or middle cloud ranges.

The little cotton puff clouds on the left are called "fair-weather" cumulus because they form on balmy days when the convective currents that create them fizzle out before turning them into their bigger precipitation-producing siblings, towering cumulus and cumulonimbus as shown on the right. The towering cumulus are the cauliflower clouds in front with the tell-tale flat anvil revealing the presence of a cumulonimbus behind them.