The 2007 - 2012 Lake Simcoe Clean-up Fund (LSCUF) was successful in accelerating the adoption of beneficial management practices (BMPs) in the watershed, reducing phosphorous loads from urban and rural sources, and improving information and monitoring for decision making.

The Government of Canada announced in Budget 2012 $29 million in funding to establish a renewed and expanded 2012-2017 Lake Simcoe/South-eastern Georgian Bay Clean-up Fund (herein called the Fund).  The geographic scope of the initiative was expanded beyond the Lake Simcoe drainage basin, to include the adjacent drainage basins emptying into south-eastern Georgian Bay, including the watersheds and bays of Nottawasaga Valley, Severn Sound, and the targeted coastal regions west of Highway 400/69 north of Port Severn to the French River.  The extension and expansion of the program will reduce phosphorous inputs into Lake Simcoe and South-eastern Georgian Bay, improve water quality, and conserve critical aquatic habitat and associated species in these waters.

The following are the main objectives for projects within the Lake Simcoe/South-eastern Georgian Bay Clean-up Fund:

a)    to improve environmental monitoring, assessment and scientific information required to measure the effectiveness of control strategies, and identify and assess alternative approaches to reducing phosphorous discharges;

c)    to reduce rural and urban non-point sources of phosphorous / nutrients, including implementation of BMPs for the management of soil, crops, livestock, and water use, septic systems and creating and rehabilitating wetlands and naturalizing watercourses to attenuate phosphorous discharges;

The Lake Simcoe/South-eastern Georgian Bay Clean-Up Fund is in its final funding year and no further applications are being sought at this time.

The project review process includes an assessment by a technical review committee and a Public Advisory Committee (PAC).

The Fund will target a federal contribution of one-third, but in exceptional cases, will consider supporting up to two-thirds contribution of the total cost of a project.

Potential sources of matching funds and how collaborations are to be undertaken (cash, in-kind, contributions by the applicant, landowners or others involved in the project, use of equipment, expertise etc.) must be described in the Letters of Intent.

Letters verifying the role and support provided by external collaborators will be requested in the detailed project proposal stage.

Figure 1 is a map showing the geographical boundary for the program. This is the watershed of the Lake Simcoe Region including Lake Couchiching and the Severn River west to Port Severn. It also includes the watersheds and bays of the Nottawasaga Valley, Severn Sound, and the targeted coastal regions which extend west of Highway 400/69 and from Port Severn in the South, to the French River in the North, in recognition that this region contributes directly to the problem of phosphorous and nutrients in Georgian Bay. 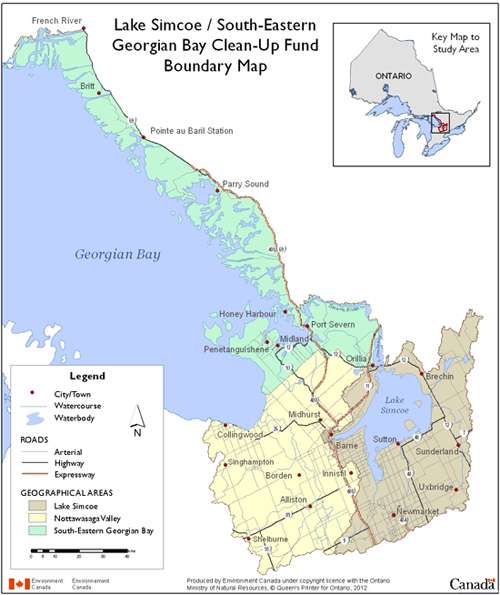 Figure 2 is a map showing the Lake Simcoe region watershed. This watershed is a major recreational area situated North of Toronto. The lake is known for its recreational fishery and generates a $200 million annual economic contribution to the area’s tourism and recreational industries. The region also supports agricultural activities, and has recently undergone increased urban development. Lake Simcoe discharges into Georgian Bay through Lake Couchiching and the Severn River. The lake is approximately 30 km long and 25 km wide, has an area of 722 km² and the watershed has total land and water surface area of 3,576 km². Thirty-five rivers flow, generally north, into the lake. The lake provides water for 6 municipalities and assimilates municipal waste from 14 treatment facilities. 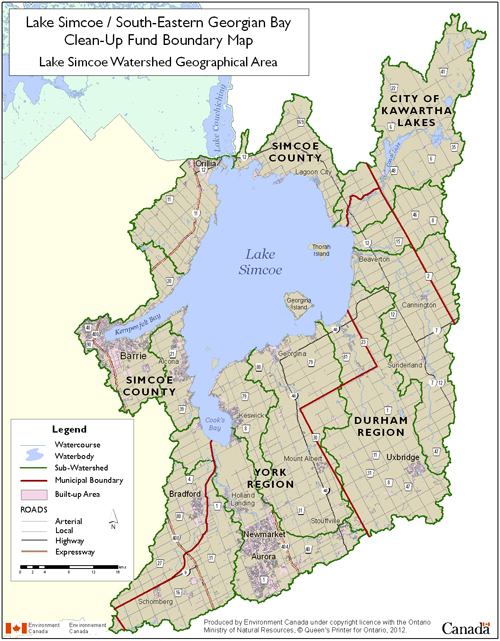 Figure 3 is a map showing the Nottawasaga Valley watershed. This watershed is located in south-central Ontario and covers an area of 3,600 km². The Niagara Escarpment, Oak Ridges Moraine and Simcoe Uplands represent the height of land along the edges of this bowl-shaped watershed. The northwestern portion of the watershed drains into Georgian Bay at Collingwood via the Nottawasaga River while the northern portions of Springwater and Oro-Medonte Townships (Severn Sound Headwaters) drain northward toward Severn Sound. Agriculture is the dominant land use. Collingwood and Wasaga Beach are the major coastal communities and attract millions of dollars in tourism and recreational activities annually. The watershed contains approximately 2,636 hectares of coastal areas, 58,475 hectares of stream systems, 1,310 hectares of lakes and 24,165 hectares of wetlands. 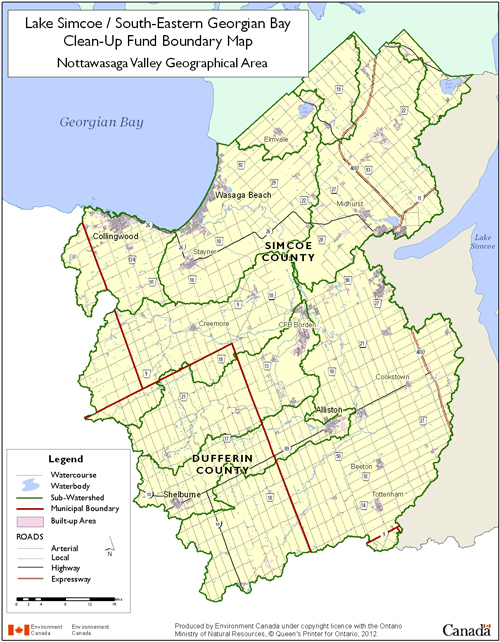 Figure 4 is a map showing the geographical boundary for South-eastern Georgian Bay. This is comprised of three sections: Lake Couchiching, Severn Sound and the coastal region of Georgian Bay. First, Lake Couchiching is connected to the northern end of Lake Simcoe. The region surrounding Lake Couchiching is a major recreational area north of Toronto. The lake is known for its recreational fishery due to its access to Lake Simcoe. The region supports agricultural activities, and has recently undergone increased urban development. Lake Couchiching is connected to Georgian Bay through the 30 km long Severn River portion of the Trent-Severn Waterway. The lake is approximately 16 km long and 5 km wide, and has a water surface area of 33.75 km². Second, Severn Sound is a group of bays covering an area of approximately 130 km² and is located in south-eastern Georgian Bay, Lake Huron. The contact between the Precambrian shield and the sedimentary bedrock with varying overburden runs down the middle of the Sound. The basin is a complex of sheltered to exposed bays ranging from 2 to 4 meters deep in the eastern end to a 43 meters deep basin off the northern end of Beausoleil Island where the Sound meets Georgian Bay. The Severn Sound watershed encompasses a combination of small urban and rural areas with a permanent population of approximately 110,000 people and a seasonal population of 300,000 people. The small urban areas are served by nine municipal sewage plants with extensive areas on private sewage systems. Municipal water supplies include thirty two groundwater systems and two surface water systems. Finally, the coastal region between Port Severn and the French River (west of Highway 400/69) is comprised of Precambrian Shield with little soil overburden, open waters, sheltered bays, coastal wetlands, bedrock shores, sand and cobble beaches and other distinct habitat types supporting rare species and fish communities. The town of Parry Sound is the largest community on the coast. Several coastal areas are popular cottage destinations and have developed into major open water and service areas for a growing cottage community due mostly to easy road access. As a result, these areas have seen a large amount of shoreline development, tourist resorts, marinas, and an expanding year-round resident population. Water quality monitoring results for some of these areas identified high phosphorous levels in surface waters along with reduced water clarity, dissolved oxygen depletion in deepwater zones, heavy plankton blooms and blue-green algae occurrences that have resulted in the issuance of health advisories. 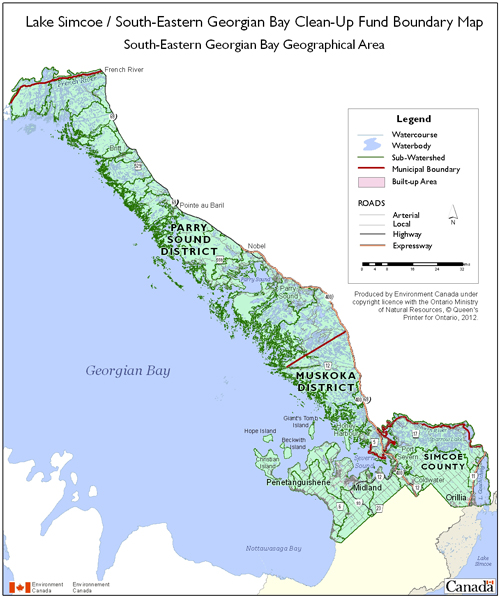