MANAIR Manual of Standards and Procedures for Aviation Forecasts: chapter 6

AIRMET: Information message issued by a meteorological watch office (MWO) to advise pilots of the occurrence or expected occurrence of specified weather phenomena which may affect the safety of aircraft operations, which were not already included in a Graphic Area Forecast (GFA), and the development of those phenomena in time and space.

As per Technical Regulations, Volume II, Meteorological Service for International Air Navigation, section [C.3.3] 3.2.2 (WMO-No. 49), the depiction of the location of the phenomenon shall use the polar stereographic projection true at 60 degrees latitude north with lines between coordinate points as orthodromes (great circles).

The only units explicitly stated are:

ICAO Annex 3 provides one AIRMET format which encompasses all of the specified weather phenomena. An AIRMET can be identified through the data type designator included in the WMO abbreviated heading of an AIRMET message as explained in section 6.7.

6.7 Structure of the AIRMET message

An AIRMET message consists of:

Note: In the following text, square brackets [ ] are used to indicate an optional or conditional element, and angled brackets < > for symbolic representation of a variable element, which in the real AIRMET, accepts concrete alphanumeric values.

The Manual on the Global Telecommunication System (WMO-No. 386) recommends the use of the following abbreviated headings for bulletins containing meteorological information.

The geographic designator is where the meteorological information applies to, not the issuing country.

6.8.1.4 International four-letter location indicator of the centre originating or compiling the bulletins

CCCC: As standardized practice, all AIRMET messages issued by Canada will be under CWAO which refers to the Canadian Meteorological Centre/Network Operations (CMC/NETOPS) as the centre compiling the bulletins.

CCx: Since there are no provisions in ICAO documentation for correcting an AIRMET, the correction identifier will not be used. Refer to 6.8.4 for details.

AIRMET messages will be issued in a set of two bulletins. The first one is aimed at international distribution while the second one will contain additional information for national purposes. Refer to E.3 of Appendix E for the full bulletin scheme, as shown in this excerpt:

Example (1): For an ongoing phenomenon:

Example (2): For an expected phenomenon (expected time of occurrence 0315Z):

6.8.3 Format of the meteorological part of an AIRMET

The meteorological part of an AIRMET consists of the nine elements indicated in the following table (this table has been divided into two parts due to horizontal space constraints):

The description of the phenomenon consists of a qualifier and a phenomenon abbreviation. AIRMET will be issued for the following phenomena:

The appropriate abbreviations and combinations thereof, and their meaning are given in E.5 of Appendix E.

6.8.3.3 Indication if the phenomenon is observed or forecast (element 4)

The use of “OBS” occurs if either:

The use of “FCST” occurs if either:

When FCST is used, it is assumed that the time of the occurrence or commencement of the phenomenon coincides with the beginning of the period of validity in the first line of the SIGMET.

The location of the phenomenon is depicted as an area using coordinate points:

Note (1): A radial distance is used to define the size of the circle.

Note (2): The area is defined by a distance either side of the line.

Note (3): Polygon must be closed. The last coordinate point is a repeat of the first one.

There are two exceptions to this rule:

Note (1): Distance is in nautical miles (NM) with units not explicitly stated.

Note (3): Refer to E.7 of Appendix E for the list of available aviation reference sites.

The location and extent of the phenomenon in the vertical is given by one or more of the above abbreviations, as follows:

Square brackets “[ ]” indicate that element 6 is optional. Specifically, element 6 is not required for the three following phenomena:

Direction of movement is given with reference to one of the 16 points of compass (radials1). Speed is given in knots (KT). The abbreviation “QS” is used if no significant movement is expected.Example: MOV SSE 15KT

The expected evolution of the phenomenon’s intensity is indicated by one of the following abbreviations:

The remark (RMK) is found only in the national AIRMET message. It begins on a new line. The purpose is to allow additional information of national interest to be conveyed in an AIRMET message. Items listed in the remark line will be separated by a forward slash “/”. 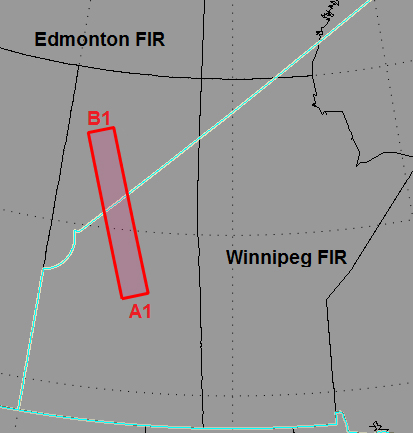 The above phenomenon requires two AIRMET messages, one per FIR. The description will be identical in both messages (1) and (2): 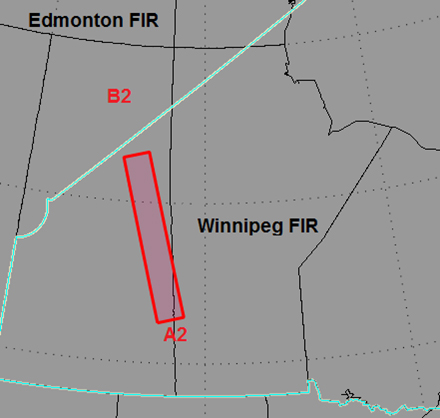 The above phenomenon is a continuation of Figure 6. In other words, the area has moved southeastward with time. AIRMET A2 is an update of A1 while AIRMET B2 is a cancellation of B1 since the phenomenon no longer affects the Edmonton FIR. The messages would look like this:

In the event of an AIRMET message transmitted with an error, a correction is sent by updating the AIRMET according to 6.8.5.

For rules regarding the alphanumeric sequence, refer to 6.8.2.1.

Example (1): For an ongoing phenomena:

Example (2): For an expected phenomenon (expected time of occurrence 0315Z):

Cancelling an AIRMET is required when:

In the case of a AIRMET for an ongoing phenomenon:

In the case of a AIRMET for an expected phenomenon:

The second line of a cancelled AIRMET consists of six elements identified in the following table:

Indicated by the abbreviation “CNCL”.

The abbreviation “AIRMET” followed by the alphanumeric sequence of the message being cancelled.

A reference to the valid period for the AIRMET being cancelled.

Example (1): For an ongoing phenomenon:

Example (2): For an ongoing phenomenon:

Example (3): For an expected phenomenon (expected time of occurrence 1500Z):

There may be occasions when test AIRMET messages are transmitted by the meteorological watch office (MWO). The test AIRMET messages will be identifiable by the letter “T” in the alphanumeric sequence (refer to 6.8.2.1). Additionally, the statement “THIS IS A TEST” will be added at the beginning and end of the message.

An AIRMET is issued to advise pilots of the occurrence or expected occurrence of specified weather phenomena which may affect the safety of aircraft operations, which were not already included in the Graphic Area Forecast (GFA). Once issued, an AIRMET message automatically amends the current GFA. If the phenomenon is included in the GFA, then there is no requirement to issues an AIRMET.

Conversely, a phenomenon that had resulted in the issuance of an AIRMET may increase in intensity to the SIGMET criteria. In this situation, the AIRMET shall be cancelled while a SIGMET shall be issued.