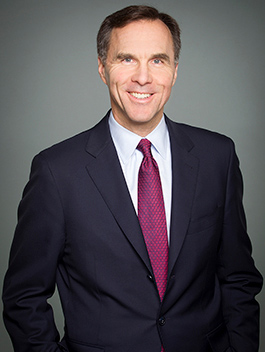 Represents the riding of Toronto-Centre

The Honourable Bill Morneau has served as the Member of Parliament for Toronto Centre since 2015.

As Canada’s Minister of Finance, Minister Morneau has played a key role in shaping government policy and initiatives, including the introduction of the Canada Child Benefit, tax cuts for the middle class, historic new investments in affordable housing, and the negotiation of an enhanced Canada Pension Plan.

Minister Morneau is an accomplished business leader, and has volunteered in Toronto Centre for more than 20 years. He has worked to support the arts, help at-risk youth, and improve access to health care and education. He served as chair of the board at St. Michael’s Hospital, Covenant House Toronto, and the C.D. Howe Institute. He has also served on the boards at the Loran Scholars Foundation and the Learning Partnership, and as a pension investment advisor to the Government of Ontario.

In addition to his work in Canada, he also founded a school for Somali and Sudanese girls in the Kakuma Refugee Camp, a United Nations High Commissioner for Refugees camp in northern Kenya.

Before entering politics, he led the human resources firm Morneau Shepell. Under his leadership, the firm grew from 200 employees to 4,000, becoming the largest firm of its kind in Canada, providing services to thousands of Canadian organizations and millions of Canadians.

Minister Morneau holds a Bachelor of Arts from Western University, a Master of Science from the London School of Economics, and a Master of Business Administration from the Institut Européen d'Administration des Affaires. He also co-authored a book, The Real Retirement.