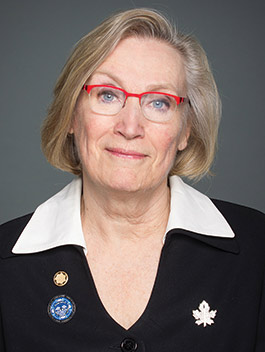 Minister of Mental Health and Addictions and Associate Minister of Health

Represents the riding of Toronto-St. Paul’s

Prior to her election in 1997, Minister Bennett was a family physician and a founding partner of Bedford Medical Associates in downtown Toronto. She was also an Assistant Professor in the Department of Family and Community Medicine at the University of Toronto. Her fight to save the Women’s College Hospital of Toronto inspired her to enter politics.

Minister Bennett is an active representative of Toronto—St. Paul’s. She has organized over 75 town halls, quarterly meetings, information sessions, and special activities for her constituents since 2000. She and her office have assisted hundreds of constituents with their immigration, tax, pension, or employment insurance concerns.

Minister Bennett speaks passionately about Canada and Canadians’ participation in the democratic process. She advocates for health, the environment, women’s involvement in politics, and persons with disabilities. She is also known for her strong support of Israel.

In 1986, she received the Royal Life Saving Society’s Service Cross – a Commonwealth Honour Award recognizing her more than 20 years of distinguished service. In 2002, she was the recipient of the coveted EVE Award for contributing to the advancement of women in politics, and in 2003, she received the first-ever Champion of Mental Health Award from the Canadian Alliance on Mental Illness and Mental Health. She was also the first recipient of the National Award of Excellence for Outstanding Leadership and Dedication to Injury Prevention and Safety Promotion in Canada, and is the co-author of Kill or Cure? How Canadians Can Remake Their Health Care System.