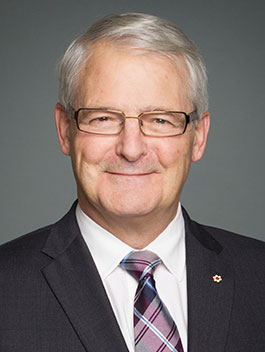 Represents the riding of Notre-Dame-de-Grâce–Westmount

The Honourable Marc Garneau has served as a Member of Parliament since 2008.

As Minister of Transport from 2015 to 2021, Minister Garneau worked tirelessly to move forward with important measures to improve safety across all modes of transportation like Canada’s new Passenger Bill of Rights, the Safer Skies Initiative, and the Oceans Protection Plan.

Minister Garneau began his service to Canada in the Royal Canadian Navy, working as a combat systems engineer aboard the HMCS Algonquin in 1974. He was later promoted to commander and naval captain, before retiring from the Navy in 1989.

Minister Garneau was one of six Canadian astronauts selected out of over 4,000 candidates in 1983, and began astronaut training the following year. In 1984, he made history by becoming the first Canadian astronaut to fly in space as a payload specialist on Shuttle Mission 41-G. In 1989, he was named Deputy Director of the Canadian Astronaut Program, and provided technical and program support in the preparation of experiments for future Canadian missions. He was later appointed Executive Vice-President of the Canadian Space Agency and then President, before leaving in 2005 to pursue a career in politics.

In 2003, Minister Garneau was made a Companion of the Order of Canada, Canada’s highest civilian honour, and in 2014, he became an Honorary Fellow of the Royal Canadian Geographical Society.