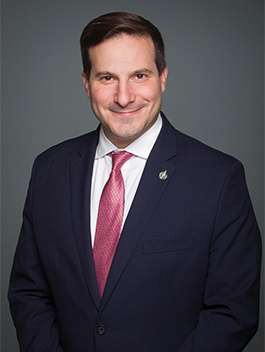 Represents the riding of Eglinton-Lawrence

The Honourable Marco E. L. Mendicino was first elected as the Member of Parliament for Eglinton-Lawrence in 2015. He has previously served as Minister of Immigration, Refugees and Citizenship.

Minister Mendicino is a proud resident of Toronto and a passionate advocate for his community. As a Member of Parliament, he has been a champion for local investments in public transit and affordable housing, and supported youth-driven programs aimed at creating more employment opportunities and safe spaces.

Before entering politics, Minister Mendicino served as a federal prosecutor for nearly 10 years, helping to fight against organized crime and bring terrorists – including members of the “Toronto 18” – to justice. He also worked at the Law Society of Ontario, was elected President of the Association of Justice Counsel and taught trial advocacy as an Adjunct Professor at Osgoode Hall Law School.

The son of an immigrant family, Minister Mendicino has a long track record of community activism in Eglinton—Lawrence. He has sat on numerous boards, volunteering at John Wanless Junior Public School, COSTI Immigrant Services, the Toronto Symphony Volunteer Committee, the North Toronto Soccer Club, and the Heart and Stroke Foundation of Canada.

Minister Mendicino lives in Toronto with his wife and children.