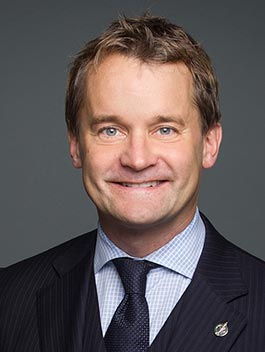 The Honourable Seamus O’Regan Jr. was first elected as the Member of Parliament for St. John’s South—Mount Pearl in 2015. He has previously served as Minister of Natural Resources, Minister of Indigenous Services, and Minister of Veterans Affairs and Associate Minister of National Defence.

Previously known to Canadians for his 10 years as co-host of CTV’s Canada AM, he was named one of Maclean’s magazine’s “100 Young Canadians to Watch” in 1999, and was twice nominated for a Gemini Award. In 2007, he became the first journalist to be named to Canada’s Top 40 Under 40. In 2012, he was named Bell Let’s Talk Ambassador, alongside Clara Hughes, with the aim of removing the stigma of mental illness through greater communication and understanding.

Minister O’Regan has traveled to Liberia as a Spread the Net Ambassador in support of the fight against malaria, and to Antarctica with Students on Ice to report on the effects of climate change on our polar regions. While working for the Government of Newfoundland and Labrador, Minister O’Regan was an executive assistant for the Minister of Justice and a senior policy advisor to the Premier.

For 10 years, Minister O’Regan sat on the board of The Rooms, home of Newfoundland and Labrador’s provincial art gallery, museum, and archives. He is a founding board member of both the Smiling Land Foundation and The Company Theatre, and served on the boards of World Wildlife Fund Canada, The Walrus, Katimavik, and Canada World Youth.

Originally from St. John’s, Newfoundland, Minister O’Regan was raised in Goose Bay, Labrador. He studied politics at St. Francis Xavier University and University College Dublin, and marketing strategies at INSEAD, near Paris. He received a Master of Philosophy degree from the University of Cambridge in England.