Our Health, Our Environment: A Snapshot of Environmental Health in Canada

Today it is widely recognized that human health is affected by changes to our environment and that these changes can have a positive or negative impact on our health. Developments such as the expansion of urban living environments and advanced sanitation systems have greatly contributed to improvements in population health over the last century, namely by increasing access to safe food and water. Similarly, pollution, climatic uncertainties and some significant aspects of industrial and urban development have had some negative impacts on our health.

Since our health is linked to the places in which we live, the water that we drink and the air that we breathe, environmental health has a direct impact on our physical well-being. According to the World Health Organization (WHO), environmental health "addresses all the physical, chemical, and biological factors external to a person, and all the related factors impacting behaviours". Environmental health is a very broad topic, including many challenges and opportunities. This publication focuses on the aspects of human health that are determined by the presence or absence of different substances in the environment, both synthetic and natural, as well as living organisms. These include chemical substances, dust mites, mould and microorganisms found in the home and the community.

The past century's technological advances have led to significant improvements for our society. However, along with some major benefits, advances in technology have introduced new substances into the environment and have also increased the amount of some naturally occurring substances (e.g., lead and mercury). In some instances, the production and use of these substances exceed our knowledge of possible health risks they could pose. While many substances are found at concentrations below the level at which scientists consider them to be a risk, exposure to some substances is linked to respiratory, cardiovascular, neurological and reproductive problems, as well as some cancers. 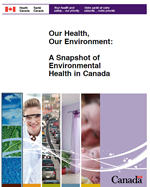 As knowledge of the possible short- and long-term health risks posed by substances or living organisms in our environment increases, so too do actions to limit our exposure. For example, a greater understanding of the negative health effects of lead resulted in actions to reduce its use and release in Canada. Lead was removed from gasoline and its release into the air from mining and smelting activities was restricted. As a result, findings from a recent biomonitoring survey show that the amount of lead in Canadians' blood has decreased significantly over the past thirty years.

Lead: This section summarizes the current knowledge of the health effects associated with this heavy metal, which is found in many different sources within Canadian living environments. Although Canada has made much progress in reducing the amount of lead released into the environment, there is still work to be done to reduce exposure levels further, especially for small children. The level of exposure and the effect lead has on your health is dependent on many factors, including where you live, your age and behaviour and the hobbies in which you are involved.

Indoor Air Quality at Home: This section explains some of the most common indoor air health concerns and how to improve the quality of the air in homes. In general, Canadian homes have good air quality, measuring below the recommended limits for levels of pollution established by Health Canada in the Residential Indoor Air Quality Guidelines. However, indoor air pollutants like mould, dust mites and radon, as well as how a house is built and maintained, can all affect indoor air quality.