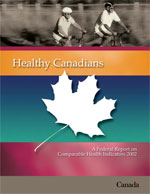 In September 2000, Canada's First Ministers reiterated their commitments to accountability and reporting to Canadians. They directed Health Ministers to provide comprehensive and regular public reporting on health programs and services and on health system performance. They also directed Health Ministers to develop a framework of jointly agreed comparable indicators of health status, health outcomes and quality of service such that each jurisdiction would begin reporting by September 2002. First Ministers identified 14 areas for reporting, and jurisdictions, through the Conference of Deputy Ministers of Health, have agreed to 67 specific indicators.

Healthy Canadians -- A Federal Report on Comparable Health Indicators addresses 58 of the 67 indicators for Canadians as a whole. Although there are national numbers for most of the health status and health outcomes measures, national numbers for indicators of quality of service are only available in cases where national surveys were conducted or where all jurisdictions reported data in a manner that made a national total possible. In addition, this report provides information on such populations as First Nations on reserve, veterans, military personnel and inmates of federal penitentiaries, for whom the federal government has particular responsibilities in the area of health care services delivery.