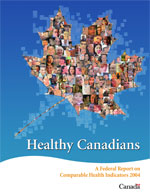 The September 2000 First Ministers' Communiqué on Health gave direction to federal, provincial and territorial health ministers to collaborate on the development of a comprehensive framework of health indicators. Ministers committed to reporting on comparable health indicators that measure health status, health outcomes and quality of health care service. In September 2002, all 14 jurisdictions, including the federal government, released their reports on 67 comparable indicators.

The February 2003 First Ministers' Accord on Health Care Renewal (the Accord) directed health ministers to further develop indicators to supplement the work on comparable indicator reporting. This has resulted in a suite of 70 indicators which address a number of themes and priority areas identified in the Accord. The current report -- Healthy Canadians -- A Federal Report on Comparable Health Indicators 2004 -- is the federal government's report on the 18 health indicators selected by federal, provincial and territorial governments for detailed reporting in 2004. These indicators are based on extensive input from a range of stakeholders and experts, as well as on results of public focus group testing.

Much of the data in this report comes from national data sources provided by Statistics Canada, Health Canada and the Canadian Institute for Health Information. This report also includes limited data on First Nations and Inuit populations.