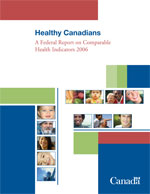 In 2000, First Ministers made a commitment to report to Canadians on the performance of our health care system. Healthy Canadians--A Federal Report on Comparable Health Indicators 2006 is the federal government's third report on this issue.

The indicators presented in Healthy Canadians 2006 are based on input from health partners, experts and the general population. Most of the data and information in this report come from Statistics Canada and the Canadian Institute for Health Information and pertain to the general population. In addition, limited information is presented on First Nations and Inuit populations as well as on military personnel. All data are from 2005 except where stated, and all highlighted differences are statistically significant.