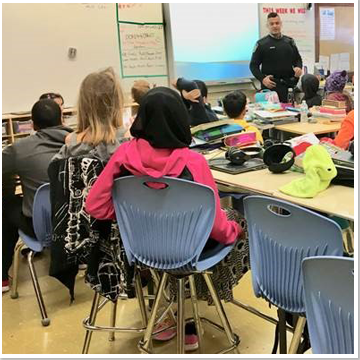 Born in Syria to Palestinian parents, Fadhl Abu-Ghanem immigrated to Canada at the age of 7. He has become a source of inspiration, empowerment and affirmative change for young men in Edmonton.

Fadhl’s aspiration to help youth stems from his childhood. “I grew up in Ottawa without someone to look up to”, he says. “I was lucky to have the Boys and Girls Club to turn to”.

When Fadhl got older he decided to pay it forward by volunteering at the Boys and Girls Club of Ottawa to support those who didn’t have a father figure. He mentored 2 teenagers once a week for 4 hours, listening to their issues, giving them advice and helping with their school work. His past experience allowed him to connect with the youth and help them navigate through tough situations.

Fadhl’s first job was working with young offenders in Ottawa as a corrections officer. “I spoke to them about the roadblocks they faced that could have been avoided if they had a positive role model and were given better direction and support”, he says.

Fadhl’s greatest strengths have always been his genuine love for building communities, and his ability to use personal experiences to connect with and inspire the youth he works with. The community members that he engages go from having no hope or direction to creating goals and plans because they feel like someone genuinely believes in them and can advocate on their behalf.

Following his move to Edmonton to work as a transit peace officer, Fadhl’s dedication to youth continued. He mentored students at the Spruce Avenue Junior High School for the All In for Youth initiative. This weekly program for boys ages 12 to 16 allows the students to focus on developing skills that will set them up for success in the future.

Fadhl played basketball with the boys and volunteered with them at a homeless shelter. He talked to them about healthy relationships and domestic violence, and helped them write resumes.

Fadhl’s mentorship of the boys inspired some of them to look into a career in law enforcement. He encouraged them to join the Edmonton Police Cadets and gave them advice on education options for a rewarding career.

Eighteen-year-old Cody Noel-Dupuis is one of the boys Fadhl mentored. He graduated high school and is volunteering at the Boys and Girls club before going to college in September.

“Fadhl helped guide me to the path I am on now. He showed me it’s a part of life to make mistakes, and what counts is learning from them”, Cody says. “Because of Fadhl I had the opportunity to plan out how I see my life going and to set multiple goals to achieve in my life”.

Fadhl’s hard work and commitment haven’t gone unnoticed. He was awarded with the Stars of Alberta Volunteer Award in December 2017 and continues to have a long-lasting impact on people’s lives.