from the
Public Health Agency of Canada
on the
Access to Information Act
for the period
of April 1, 2009 to March 31, 2010

To promote and protect the health of Canadians through leadership, partnership,
innovation and action in public health.
Public Health Agency of Canada

Annual Report 2009-2010
Access to Information Act
is available on the Internet at the following address:
http://www.phac-aspc.gc.ca

This publication can be made available in alternative formats upon request.

The Access to Information Act (ATIA) gives Canadian citizens and individuals present in Canada a broad right of access to information contained in government records subject to certain specific and limited exceptions.

Section 72 of the ATIA requires that the head of every government institution prepare for submission to Parliament an annual report on the administration of the Act within the institution for each financial year.

This Annual Report provides a summary of the management and administration of the ATIA within the Public Health Agency of Canada for the fiscal year 2009-2010.

For further information or to make a request under the Access to Information Act, please direct your inquiries to:

1.1 Background on the Agency

The Public Health Agency of Canada (PHAC) is the main Government of Canada agency responsible for public health in Canada. PHAC’s primary goal is to strengthen Canada’s capacity to protect and improve the health of Canadians and to help reduce pressures on the health-care system. To do this, the Agency is working to build an effective public health system that enables Canadians to achieve better health and well-being in their daily lives by promoting good health, helping prevent and control chronic diseases and injury, and protecting Canadians from infectious diseases and other threats to their health. PHAC is also committed to reducing health disparities between the most advantaged and disadvantaged Canadians.

Because public health is a shared responsibility, the PHAC works in close collaboration with all levels of government (provincial, territorial and municipal) to build on each others’ skills and strengths. The Agency also works closely with non-government organizations, including civil society and business, and other countries and international organizations like the World Health Organization (WHO) to share knowledge, expertise and experiences.

The PHAC was established in September 2004, in part as a response to the SARS outbreak in 2003, and was confirmed as a legal entity in December 2006 by the Public Health Agency of Canada Act .

PHAC is one of six departments and agencies that make up the federal government’s Health Portfolio and reports to Parliament through the Minister of Health. PHAC is managed by the Chief Public Health Officer of Canada, currently Dr. David Butler-Jones, who plays a dual role:

Deputy minister in the federal public service, heading the Agency and advising the Minister of Health on matters of public health and the function of the Agency; and

To maintain the knowledge and skills needed to develop and deliver the public health advice and tools required by Canadians, the Agency relies on the efforts of its dedicated staff. PHAC’s approximately 2,400 employees work across Canada in a wide range of operational, scientific, technical and administrative positions.

Public health focuses on the entire population at both the individual and the community level. It encompasses a range of activities performed by all three levels of government (federal, provincial/territorial, and municipal) in collaboration with a wide variety of stakeholders and communities across the country.

The role of the Public Health Agency of Canada is to:

Through our research, programs and services, our goals are to bring about healthier Canadians, reduced health disparities, and a stronger capacity to deliver on and support public health activities.

The Minister of Health is the designated head of the Agency for the purposes of Section 73 of the Access to Information Act. The Minister has delegated full authority for the administration of the Act to the ATIP Director/Coordinator.

In serving Parliament and Canadians, the PHAC is guided by and proudly adheres to the following organizational values:

The PHAC has a Director/Coordinator of Access to Information and Privacy (ATIP) that is responsible and accountable for the development, coordination and implementation of effective policies, guidelines, systems and procedures to enable the efficient processing of requests under the ATIA.

The Director/Coordinator is also responsible for related policy, systems and procedures emanating from the Act, such as the government's policy on information collection.

The activities of the Director/Coordinator include:

Of note, the entire Agency was mobilized in order to support the response to the H1N1 pandemic. This also caused a significant increase in related ATI requests further taxing the ATIP Office resources and adding to the workload of the programs who were responding to the outbreak.

During the fiscal year, a Full assessment was conducted by the Treasury Board Secretariat for the PHAC, as part of the Management Accountability Framework (MAF) leading to the changes in the Info Source introduction, to better reflect the PHAC's Program Activity Architecture (PAA). Over the coming years, with resources permitting, the PHAC will continue the work on revamping its Info Source Chapter to re-align the classes of records and personal information banks to reflect the PAA. Individualized training and mentoring to program representatives will continue to be provided in order to ensure a complete Info Source.

In 2010-2011, PHAC ATIP Director/Coordinator intends to implement the following initiatives:

The responsibilities associated with the administration of the ATIA, such as notifying applicants of extensions and transferring requests to other institutions, are delegated to the PHAC ATIP Director/Coordinator through a delegation instrument signed by the Minister of Health Canada.

A detailed delegation instrument is reproduced at Appendix A.

The PHAC has continued to improve the way in which the Agency responds to ATIP requests, by focusing on improving timeliness, efficiency and accuracy. The PHAC ATIP Director/Coordinator implemented concrete measures in FY 2009-2010 that allowed the Agency to achieve these goals, and the Agency will continue to build on these improvements over the next three years. Some of the highlights are as follows:

Section 2: Report on the administration of the Access to Information Act

Appendix B provides a statistical summary of the access to information requests received and/or finalized in 2009-2010.

As in previous years, the requests completed covered the entire gamut of the PHAC's activities.

As was the case last year, the preferred method of access reported by the PHAC, as well as by departments and agencies throughout the federal government, is to receive copies of government records as opposed to simply view them.

The Agency finalized the 160 requests cited in Appendix B in the following manner:

As noted in Appendix B, exemptions under sections 13, 14, 15, 16, 17, 19, 20, 21, 23, and 24 of the Act were invoked by PHAC. Appendix B is intended to show the number of requests where specific types of exemptions were invoked to sever information. For example, if, in processing a request, five different exemptions were applied by PHAC, one exemption under each relevant section would be reported for a total of five. If the same exemption is claimed several times for the same request, it is reported only once in Appendix B.

The Act does not apply to published material pursuant to section 68 and to confidences of the Queen's Privy Council pursuant to section 69. Appendix B also shows the number of requests where exclusions were invoked. Similar to the above, if under one request, two different exclusions were claimed, one exclusion, under each relevant section, would be reported for a total of two. If the same exclusion is applied several times for the same request, it is reported only once in Appendix B.

Section 9 of the Act provides for the extension of the statutory time limits if consultations are necessary or the request is for a large volume of records and processing the request within the original time limit would unreasonably interfere with the operations of the Agency. During the reporting period, 93 requests were within 30 days, 18 requests were extended for 30 days, and another 49 requests required extensions for more than 60 days.

The fees collected during the reporting period totalled $2,272.20. In accordance with government policy, it is the Agency’s practice to waive photocopies fees where the total owing per requests amounts to less than $25.

15 complaints regarding requests addressed to the PHAC were lodged with the Office of the Information Commissioner (OIC) during this reporting period.

Section 3: Report on Access to Information Consultations and Informal Requests

The PHAC received 89 requests for consultations from other government departments and agencies. These requests amounted to a review of over 2,379 pages of information. After a thorough review of the files, the PHAC determined that in 7 of the 77 requests (completed over the course of the reporting period), information pertaining to the PHAC could be released in full.

There were 141 informal requests processed during this reporting period. 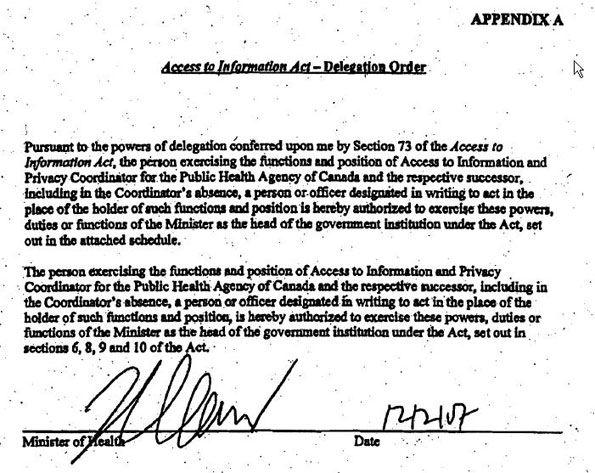 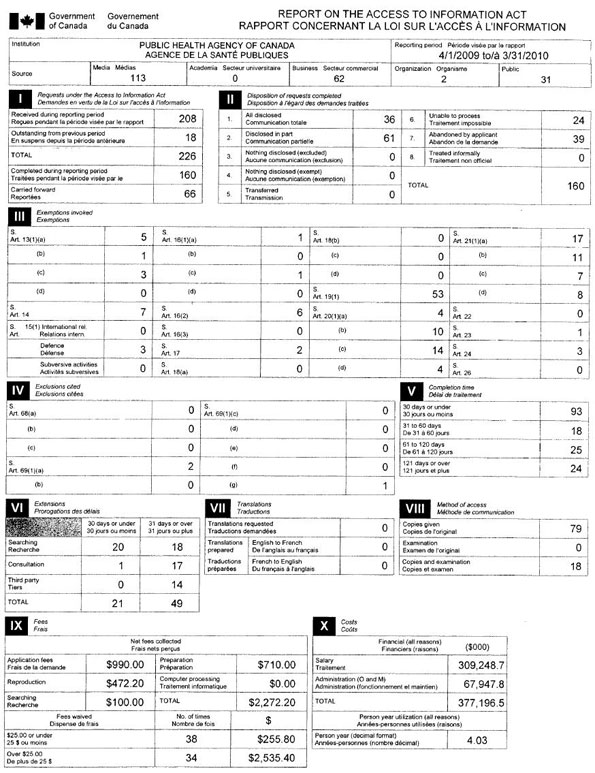 No deviations are reported.

In addition to the reporting requirements addressed in form TBS/SCT 350-62 "Report on the Access to Information Act" institutions are required to report on the following using this form: