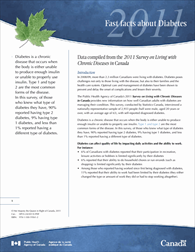 Fast facts about Diabetes: Data compiled from the 2011 Survey on Living with Chronic Diseases in Canada

In 2008/2009, more than 2.3 million Canadians were living with diabetes. Diabetes poses challenges not only to those living with the disease, but also to their families, and the health care system. Optimal care and management of diabetes have been shown to prevent and delay the onset of complications and lessen their severity.

The Public Health Agency of Canada's 2011 Survey on Living with Chronic Diseases in Canada provides new information on how well Canadian adults with diabetes are managing their condition. This survey, conducted by Statistics Canada, interviewed a nationally representative sample of 2,933 people. Half were male, aged 20 years or over, with an average age of 63, with self-reported diagnosed diabetes.

Diabetes is a chronic disease that occurs when the body is either unable to produce enough insulin or unable to properly use insulin. Type 1 and type 2 are the most common forms of the disease. In this survey, of those who knew what type of diabetes they have, 90% reported having type 2 diabetes, 9% having type 1 diabetes, and less than 1% reported having a different type of diabetes.

Diabetes can affect quality of life by limiting daily activities and the ability to work.
For instance:

Diabetes may lead to complications affecting the eyes, kidneys, heart, brain, and limbs, if blood glucose, blood pressure and blood cholesterol are not controlled. Nearly two thirds (61%) of Canadians living with diabetes reported having at least one complication diagnosed by a health care professional. Specifically:

Good control of blood glucose, blood pressure, and cholesterol levels can substantially reduce the risk of developing complications. Healthy lifestyles help prevent diabetes complications, while improving quality of life. Many people with diabetes reported making changes to their lifestyle, at least some of the time, to control their diabetes or for other reasons:

For most people with diabetes, medication is also a core component of diabetes management:

Self-monitoring of blood glucose levels can help people living with diabetes adjust their lifestyle and medication to better manage their blood glucose:

Clinical care is essential to ensure that diabetes is being properly managed and controlled, and most Canadians with diabetes report receiving such care:

Most Canadians with diabetes reported being actively involved in managing their disease and receiving appropriate health care. However, a substantial proportion of people with diabetes (two in three) reported having at least one complication likely associated with their disease or its risk factors. Less than one in ten reported difficulties in obtaining routine or ongoing care for their diabetes. Although most Canadians with diabetes reported trying to exercise and eat a healthy diet, the majority were also overweight or obese. Maintaining a healthy lifestyle and having a healthy weight, together with medication adherence, are cornerstones of diabetes self-management.

Additional information on diabetes can be found online at: