Vaccines are closely monitored in Canada at all phases of the vaccine product ‘life cycle’ from discovery through market authorization (pre-market) and beyond, as people begin using them (post-market). Many stakeholders are involved in vaccine safety surveillance including the federal government, provincial, territorial and local public health authorities, health care providers, vaccine industry and the public. Provincial and territorial vaccination programs monitor AEFIs and report them to the Public Health Agency of Canada (the Agency). The Agency conducts post-market safety surveillance through the Canadian Adverse Events Following Immunization Surveillance System (CAEFISS). Vaccine safety concerns are monitored and addressed through the Vaccine Vigilance Working Group (VVWG).

An Adverse Event Following Immunization (AEFI) is defined as any untoward medical occurrence which follows immunization and which does not necessarily have a causal relationship with the usage of the vaccine. The adverse event may be any unfavourable or unintended sign, abnormal laboratory finding, symptom or disease. Serious AEFIs are those which are life-threatening, result in hospitalization or a prolongation of hospitalization, result in persistent or significant disability, or where the outcome is a birth defect or death, as defined by the World Health Organization (WHO). AEFIs not meeting the definition of a serious event are classified as non-serious.

WHO defines a vaccine safety signal as information (from one or multiple sources) that indicates a new and potentially causal association, or a new aspect of a known association, between a vaccine and an event previously unknown or incompletely documented that could affect health. Epidemiological studies are usually needed to assess the causal relationship between the vaccine and the signal. The primary purpose of vaccine post market surveillance is to detect safety concerns. These concerns include a possible increase in the severity or frequency of expected AEFIs, or occurrence of one or more unexpected events (i.e., an event that is not consistent with Canadian product information or labeling). This allows vaccination providers and public health vaccination program providers to take public health action at the level of the:

The Agency also shares AEFI data with Health Canada’s Health Products and Foods Branch, the national regulatory authority for vaccines in Canada.  This enables formal action related to vaccines marketed in Canada to take place if needed. These actions may include issuing communications to vaccination providers or the public regarding the safety concern or requiring additional information or investigation by the vaccine distributor, or changes to the product labeling.

In order to reflect variability in the AEFIs reported from year to year, each quarter’s data are shown along with an average of the preceding four years’ quarterly data; in other words, the data in this quarter, Quarter 2, are shown along with the average Quarter 2 data from the previous four years. However, because these data reflect reports received in the particular quarter, and not necessarily when the vaccine was given, they can be subject to variation depending on both when and how reports are received, processed and forwarded by provincial/territorial public health authorities as well as on the type of vaccine products used, distributed, and how many and which populations received them in a given quarter.  Therefore, the ability to compare and interpret patterns in these data is limited.  The report does provide a data snapshot that highlights serious and non-serious AEFI reports received for descriptive purposes.

Notes on interpretation: AEFI reports submitted to the Public Health Agency of Canada represent a suspicion, opinion, or observation by the reporter as opposed to an assertion or proof that the vaccine may have caused the event. Additional limitations to AEFI report data include potential underreporting, lack of certainty regarding the diagnostic validity of a reported event, missing information regarding other potential causes and other reporting biases. These biases are mitigated by the Agency through use of a national AEFI reporting form with a guide to its use, standardized medical coding using the Medical Dictionary for Regulatory Activities (MedDRA), follow-up with the jurisdictions for completeness of information, high reporting rates and inclusion of an active pediatric surveillance component in CAEFISS.

Results Highlighted for Quarter 2 of 2016

Data presented in this Quarterly Report (Q2) include AEFI case reports routinely received from April 1, 2016 to June 30, 2016 and comparisons are made to the average number of reports received in the same quarter over the previous four calendar years (2012-2015). The data analysed were extracted from the CAEFISS database on March 16, 2017 by the Agency. Due to technical issues in data submission in one jurisdiction since mid-2013, there has been a substantial decrease in the total number of AEFI reports.

All reports are processed and coded using MedDRA, a standardized medical terminology that supports data entry, retrieval, evaluation and presentation of clinical information and further coded with a main reason for reporting through a detailed review of individual case safety reports. Therefore, if more than one event is described, the one that is determined to have led to reporting is coded as the primary AEFI. In addition, all reports describing a serious event were reviewed and unless highlighted in this report, found either to be expected (based on known vaccine-related adverse reactions), to have alternate explanations not related to vaccination, or are currently being monitored or investigated further.

Frequency of Serious and Non-serious AEFI Reports by Age Group

Table 1 shows the number of serious and non-serious AEFI reports by age group in Q2 of 2016, with no significant change when compared to the 2012-2015 Q2 average.

Figure 2 presents the main types of AEFIs (both serious and non-serious) reported during Q2 of 2016. Most of the AEFIs reported are vaccination site reactions. 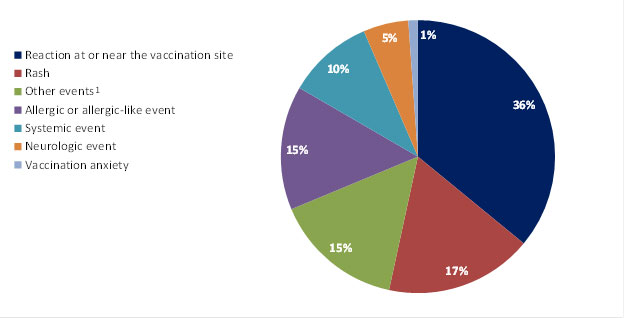 The main types of AEFI reported by level of seriousness for Q2 of 2016 compared to the 2012-2015 Q2 average are shown in Table 2. In Q2 of 2016 as well as in the past four years, reactions at or near the vaccination site, rash and allergic or allergic-like events were the main AEFIs reported for non-serious cases; systemic events (i.e., events involving many body systems often accompanied by fever) and neurologic events (which are most often seizures triggered by fever) were the most frequent AEFIs reported for the serious cases. The number of allergic or allergic-like reactions increased in 2016 due to a change in the classification of serious cases in mid-2015, as now all anaphylaxis cases are coded as life-threatening and therefore classified as serious, even if they did not result in hospitalization, prolongation of hospitalization, or death.

Table 3 lists the most commonly administered vaccines among AEFI reports received for Quarter 2 of 2016. The majority of AEFIs (serious and non-serious) were reported following the administration of pneumococcal, measles, mumps, rubella, varicella (MMRV and MMR + V), DTaP infant series and meningococcal vaccines, which is consistent with the high number of vaccinations scheduled in children and often given in conjunction with each other. Fewer serious reports were received for these vaccines in 2016 compared to the 2012-15 average.

This Quarter 2 report for 2016 is based on reports of adverse events received at the Agency from federal/provincial/territorial public health authorities and active, pediatric hospital based surveillance. Detailed evaluation of the reports and reporting patterns in collaboration with federal/provincial/territorial vaccine safety focal points of the VVWG and Health Canada have not identified any vaccine safety signals of concern. The tables and figures in this report provide a snapshot of the data provided to, and reviewed by, the PHAC.