The burden of varicella and zoster in British Columbia 1994-2003: Baseline assessment prior to universal vaccination

Infection due to the varicella zoster virus causes varicella (chicken pox) and zoster (shingles). Varicella is a vesicular rash illness occurring mostly in childhood. Historically, 50% of Canadians were infected by age 5 and 90% by 12 years. Zoster is caused by a reactivation of the virus in the sensory ganglia and leads to neuropathic pain and a dermatomal rash, typically in adulthood, with a lifetime risk of 15% to 20%(1,2).

Although the risk of complications from varicella is low (5% to 10%) in healthy children(1), the incidence of disease approached the size of the annual birth cohort in British Columbia (BC) prior to universal vaccination(3). Varicella-associated morbidity and mortality is highest in persons > 15 years of age(1,4). However, the higher attack rates in early childhood create a high burden of illness and associated complications, nearly 50% of deaths occurring in this age group(5-9). The annual medical and societal costs of varicella in Canada are an estimated $122.4 million (1997-1998), 81% of which are attributed to personal expenses and productivity costs, 9% to ambulatory medical care and 10% to hospital-based medical care(10,11).

Varicella vaccine became available in Canada in January 1999. Until 2004, the majority of varicella vaccinations were paid for privately in BC. In the absence of public funding, immunization rates among susceptible members of eligible cohorts has been < 25%(12). In September 2004, varicella vaccine was provided free of charge to high-risk individuals, and in January 2005 a publicly funded universal program was launched targeting infants at 12 months with catch-up programs for various age groups. There is some concern that universal vaccination could lead to an increase in the average age of infection, when the risk of complications is greater(13-15), and a temporary increase in the incidence of zoster(15-19). Effective surveillance will help monitor the changing epidemiology of the virus and inform vaccination policy.

Data sources
Baseline data for varicella, zoster and their complications were obtained for 10 years, 1994-2003, from physician billing data, and records of hospitalizations and deaths. Physician billing data (referred to as physician visits) were obtained from the British Columbia Ministry of Health Medical Services Plan (MSP), a single-payer system for the province. These data include physician billings from offices, hospitals and emergency departments. Data for BC hospital separations are condensed by the Canadian Institute for Health Information and made available through MSP. Data on deaths were obtained from the BC Vital Statistics Agency.

Population estimates were based on the P.E.O.P.L.E. Projections 29 (Population Extrapolation for Organizational Planning with Less Error) derived from census data (Health Data Warehouse, BC Ministry of Health Services).

Analysis
Analysis of the data was performed using SAS® v.8 for Windows for data manipulation, SPSS® v.12.0 for Windows and Microsoft Excel® (Microsoft Office XP Professional) for analysis. Data were analyzed according to date, age and sex. Age standardized rates (ASR) were calculated using the 2003 BC population.

*ICD-10 codes are not mutually exclusive, thus hospitalizations may add to > 100%.

Figure 1. Age-standardized rate and number of physician visits for zoster and varicella in BC, 1994-2003 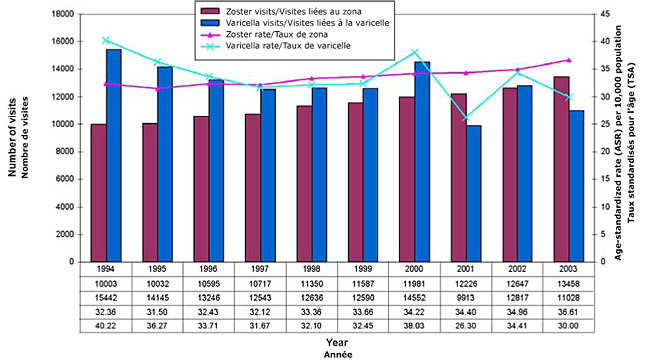 Figure 2. Age-standardized rate and number of hospitalizations for varicella and zoster in BC, 1994-2003

Figure 3. Incidence of hospitalizations for zoster by age group in BC, 1994-2003 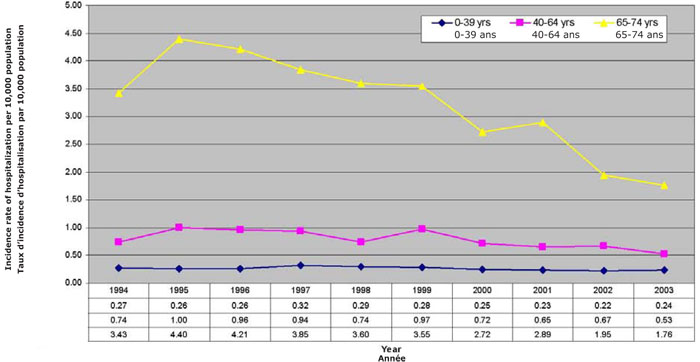 Deaths
During the 10-year period, there were seven deaths associated with varicella. The highest age-specific mortality rate was reported in those 1 to 4 years of age (0.54/million, Table 2). Zoster was the underlying cause of death in 29 BC residents between 1994 and 2003, 28 of whom were ≥ 65 years of age, for a mortality rate of 5.5/million in this age group.

The drop in varicella hospitalizations since 1999 corresponds with the licensure of vaccine. A larger impact of the vaccine is expected with the introduction of universal vaccination in 2005. A cross-sectional survey done in BC in 2003 revealed that vaccine coverage of susceptible children aged 2 to 3 and 6 to 7 years was 21% when the vaccine was not publicly funded(12).

The ASR for physician visits for zoster has been increasing whereas the rate of hospitalizations has been decreasing over recent years. The use of antivirals with anti-zoster activity has also increased over this period and may have contributed to reduced hospitalizations and increased outpatient care (Dr. David Patrick, BC Centre for Disease Control: personal communication, June 2006). Licensure of a zoster vaccine for persons > 50 years is imminent in Canada. In recent years, slight trends towards more outpatient treatment(22) and some billing outside of MSP(23) have been noted. The switch from ICD-9 to ICD-10 coding for hospitalization data in 2001 was not associated with any major deviation in the slope of the incidence curves.

The limitations of using administrative data, which are subject to coding errors and are known to underestimate the true incidence of disease, have been well documented in other studies of varicella disease(17,24,25). However, the value of these data sources in the absence of surveillance data for determining baseline incidence rates of varicella disease has also been recognized(25-28). The varicella and zoster burden of illness found in this study is consistent with that of an earlier BC study(3). However, drops in rates of varicella-associated morbidity in the United States (US) after universal vaccination were dramatically larger and may reflect the cost Canada has paid for delaying the introduction of universal vaccination(24).

The hospitalization data for the 10-year period indicate that zoster infections are associated with a higher burden of disease than varicella (1.0 compared with 0.4/10,000 population), while rates of physician visits are similar (32.5 and 28.9 per 10,000 population for varicella and zoster respectively). This is consistent with several other studies that have examined hospitalization and mortality data(27,28,31,35). Some authors warn that the introduction of universal vaccination could lead to an increase in the average age of infection, when the risk of complications is greater(13-15), and a temporary increase in the incidence of zoster(15-18). If this does occur, a varicella vaccine booster may be required. Use of zoster vaccine may also be considered, as it has demonstrated a reduction in the burden of illness due to zoster by 61.1% in a US study(36).

Given that the estimated incidence of varicella approaches the birth cohort of approximately 43,427 (average 1994-2003) in BC, 30% of ill persons seek medical attention (12,891), slightly lower than UK data (an estimated 670,000 cases of varicella leading to 41% or 275,000 consultations)(26). Active varicella surveillance in selected communities in the US has shown a 75% to 80% decrease in the incidence of varicella and a 50% to 80% decline in the average number of hospitalizations with universal vaccination(37,38). A similar reduction in Canada would translate into a reduction in physician visits from 32.5/10,000 to 7.31/10,000 population and a drop in average hospitalizations from 138 to 48 annually.

Physician billing and hospitalization data from a single-payer health care system provide useful data for monitoring the incidence of varicella and zoster with less effort required than case-by-case reporting. They demonstrate the opportunity lost to reduce varicella morbidity when Canada failed to introduce universal childhood immunization concurrently with the program in the US. These data will continue to be collected after universal vaccination to monitor the changing epidemiology of the infection as well as to establish high vaccine coverage and effectiveness. Such monitoring will inform refinements to vaccine policy, including varicella vaccination programs for susceptible adults and zoster vaccination for older populations.

We thank Mrs. M. Chong (BC Centre for Disease Control, Vancouver, BC) for her statistical consultation and Dr. K. O'Connor (Kingston, Frontenac and Lennox & Addington Public Health, Kingston, Ontario) for her review and editorial assistance. We would also like to thank the BC Medical Services Plan and the BC Vital Statistics Agency for providing us with the data.