On 27 May, 2005, a symptomatic laboratory-confirmed case of acute hepatitis A virus (HAV) infection (positive for IgM antibodies to HAV) was reported to Region of Waterloo Public Health (ROWPH). The patient worked as a food handler in a popular restaurant in Waterloo, Ontario. Over the course of the next 4 weeks, 16 laboratory-confirmed cases of hepatitis A were reported in persons who had consumed food prepared at the restaurant where the index case was employed. This report will briefly describe the outbreak, highlighting the public health strategies and interventions implemented to manage the outbreak and protect the community from further transmission. The report also seeks to highlight the global context of the illness, as it was suspected that the hepatitis A infection was acquired overseas and imported to Waterloo Region. Although outbreaks of hepatitis A described in the literature are common, this outbreak was unique in that it demonstrated HAV transmission from an infected food handler to a large number of restaurant patrons in a community setting.

Outbreak investigation
ROWPH staff learned that the index case had recently returned from visiting friends and relatives in Sri Lanka (17 February to 28 April, 2005). Sri Lanka is a country with a high prevalence of HAV, and during the visit the index case was exposed to several risk factors for the infection, including the consumption of under-cooked shellfish and untreated water. The index case returned to work on 4 May, 2005, and performed various food handling duties while symptomatic, including the preparation of cooked and ready-to-eat foods such as leafy salads.

As additional cases were reported, public health inspectors and public health nurses from ROWPH, Brant County Public Health and the Cape Breton District Health Authority Public Health Services in Nova Scotia administered comprehensive case questionnaires. A complete food history was obtained, and risk factors associated with HAV were discussed with each case, including details of recent travel, possible consumption of high-risk foods (e.g. shellfish) and possible contact with an HAV-infected individual. In all cases, the common factor identified was consumption of food from the restaurant where the index case was employed during the potential exposure period.

Risk communication
Three media releases were prepared identifying and communicating the potential risk to patrons of the restaurant, including the risk period for potential exposure, the status of the outbreak and vaccine prophylaxis eligibility. A hepatitis A hotline was established to disseminate information to the public in a timely manner, to which over 2000 inquiries were received. Because a number of cases and contacts were employed in sensitive occupations (e.g. food handlers, health and child care providers), advisories were sent to all food premises, health care facilities and child care centres in Waterloo Region. Regular updates were provided to local family physicians and hospitals through already established communication channels. Public health alerts were sent to all public health units in Ontario to inform public health professionals of the investigation. A summary of the outbreak was posted on the Canadian Network for Public Health Intelligence. These communication mechanisms were instrumental in reporting cases and contacts outside the jurisdiction of Waterloo Region.

Environmental investigation An environmental investigation was conducted to determine the level of safe food handling practices and sanitation at the restaurant. Heightened hand hygiene, safe food handling practices and the importance of environmental sanitation were communicated to all staff members of the restaurant. Safe food handler training was recommended for those who had not been previously certified. Food samples were not available from the period of exposure; therefore it was not possible to identify the food or foods contaminated with HAV.

Hepatitis A prophylaxis campaign
In accordance with the Canadian Immunization Guide(1), ROWPH initiated a campaign to administer post-exposure hepatitis A vaccine to those who may have consumed food potentially contaminated with HAV and to contacts of reported cases. Vaccine eligibility of patrons was restricted to those who had consumed food prepared at the restaurant during the 3-week exposure period (4 May to 22 May, 2005), with no more than 2 weeks having elapsed from the last date of food or beverage consumption. Approximately 750 patrons and restaurant staff received hepatitis A vaccine. Additionally, 210 persons identified as close contacts of all reported hepatitis A cases (defined as household or sexual contacts) were immunized.

Clinical signs and symptoms included a sudden onset of fever, chills, malaise, headache, fatigue, darkening of urine, loss of appetite, nausea, abdominal pain, jaundice and elevated serum aminotransferase levels. In addition to the index case, 15 met the primary case definition, two the probable case definition, and one the secondary case definition. Of the 19 cases reported, 16 resided in the Waterloo Region, two outside the Waterloo region and one in Cape Breton.

Nine blood samples from eight cases were submitted for genotyping to the National Microbiology Laboratory in Winnipeg, Manitoba. As the sampling retention protocols were different for each of the private laboratories involved in the outbreak, the serology sample from the index case was not available for genotyping. However, the genomic fragments from three of the primary cases were identical and belonged to HAV genotype IIIA. The remaining six samples were PCR negative.

Clinical presentation
The index case experienced onset of fever, nausea, chills, malaise, loss of appetite and abdominal pain on 16 May, 2005, followed by darkening of urine and jaundice 2 days later. Upon diagnosis, the food handler was excluded from work for a period of 1 week from the onset of jaundice.

Figure 1. Number of laboratory-confirmed cases of hepatitis A by date of symptom onset, Waterloo, Ontario, May-June, 2005 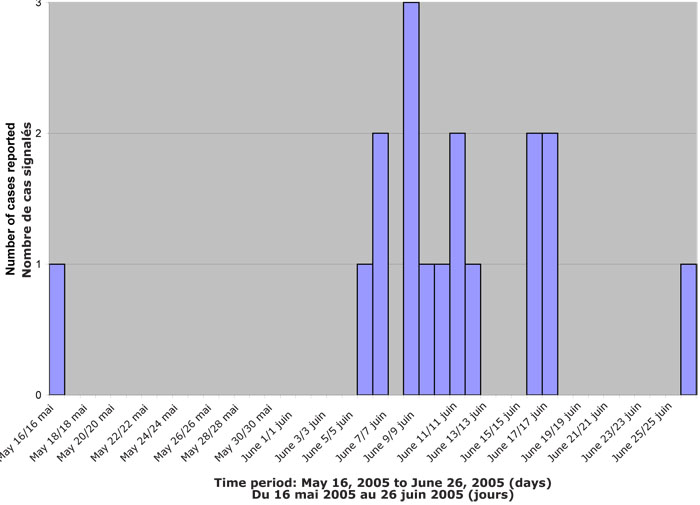 Hepatitis A is an acute liver disease caused by HAV. HAV is transmitted primarily by the fecal-oral route, either by person-to-person contact or by ingestion of contaminated food or water(2).

Foodborne hepatitis A outbreaks are relatively uncommon in developing countries because of high levels of immunity in the resident population, but foodborne transmission to non-immune travelers might be an important source of travel-associated hepatitis A(3). Hepatitis A is one of the most common vaccine-preventable infections acquired during travel(4). Although HAV vaccine is recommended for travel to endemic countries, greater effort should be directed at encouraging HAV vaccine for at-risk travelers, including those originally from endemic countries(5). However, it is somewhat unusual that the index case was susceptible to hepatitis A, since being born and raised in an endemic country would usually suggest acquired HAV immunity(2,4).

Laboratory analysis further highlights the global context of this outbreak. The laboratory-identified genotype IIIA is rarely found in North America; in Canada, the predominant genotype is type IA (A. Andonov, National Microbiology Laboratory, Winnipeg: personal communication, 2005). Although the genotype of the index case was unidentified, the travel history prior to illness onset provides a good explanation for the findings. The fact that three cases had identical HAV of genotype IIIA suggests that the virus was imported to the Region of Waterloo from Sri Lanka. Genotype IIIA is a predominant epidemic strain circulating in India, and closely related strains have been collected from humans with HAV in Sri Lanka(6,7).

There have been several outbreaks in which HAV vaccines have been used to arrest the transmission of HAV in communities, which support its use in outbreak control(1,8). Data on post-exposure immunization was available for 704 of the 750 immunized patrons in the present outbreak. Approximately 11% of those immunized received vaccine within seven days of potential exposure, 88.6% within eight to 14 days and 0.6% within 15 to 16 days of potential exposure. There were no reports of hepatitis A cases after vaccination. These data further support the use of HAV vaccine as an important control measure in a coordinated public health response to hepatitis A outbreaks(1).

Although cases of hepatitis A are reported in food handlers, most of those infected do not transmit HAV to consumers or restaurant patrons(3). Outbreaks described in the published literature demonstrate primary cases among other food handlers who ate food contaminated by the index cases but describe relatively low attack rates among exposed patrons(3). In this outbreak, although the index case claimed to practise safe food handling techniques, a high incidence of hepatitis A occurred among patrons of the restaurant. Subsequent environmental inspections revealed poor sanitation, food handlers handling ready-to-eat foods with their bare hands and several sanitation problems, including dirty floors, walls and shelving.

Although no specific food handler hygiene practices have been shown to reduce the likelihood of transmission of HAV(3), there is clear evidence that good hand hygiene and minimization of bare hand contact with ready-to-eat foods are control measures that reduce the risk of foodborne transmission within a community.

Although outbreaks such as these potentially warrant a vaccination protocol for food handlers, they also clearly identify a need for restaurant owners and food handler employers to promote strict hygiene practices for their employees.

Risk communication was an important factor in minimizing the spread of this HAV outbreak. The application of risk communication principles served two purposes in this outbreak; to communicate with other public health agencies to identify and manage cases and their contacts; and as a tool to inform the public to facilitate a relationship of trust between the agency and the community.

The experience in Waterloo Region presented in this paper describes a large community outbreak of hepatitis A attributed to an infected food handler. The summary and findings of this paper demonstrate the importance of risk communication and community public health response in order to minimize the spread of an HAV outbreak. Public health units must be responsive to the increase in global travel, especially with regard to the movement of people between endemic and non-endemic countries. The challenge is to reach persons travelling to visit friends and relatives, especially those returning to native countries, who may underestimate their risks from foodborne and waterborne illness. Reporting and reflecting on community outbreaks of HAV support the dissemination of information for evidence-based decision making in relation to outbreak prevention and control.