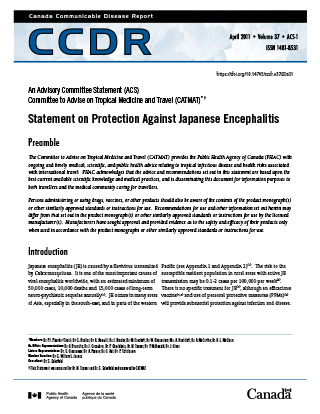 Statement on Protection Against Japanese Encephalitis

The Committee to Advise on Tropical Medicine and Travel (CATMAT) provides the Public Health Agency of Canada (PHAC) with ongoing and timely medical, scientific, and public health advice relating to tropical infectious disease and health risks associated with international travel. PHAC acknowledges that the advice and recommendations set out in this statement are based upon the best current available scientific knowledge and medical practices, and is disseminating this document for information purposes to both travellers and the medical community caring for travellers.

Japanese encephalitis (JE) is caused by a flavivirus transmitted by Culex mosquitoes. It is one of the most important causes of viral encephalitis worldwide, with an estimated minimum of 50,000 cases, 10,000 deaths and 15,000 cases of long-term neuro-psychiatric sequelae annually(1). JE occurs in many areas of Asia, especially in the south-east, and in parts of the western Pacific (see Appendixes 1 and 2)(1). The risk to the susceptible resident population in rural areas with active JE transmission may be 0.1-2 cases per 100,000 per week(2) . There is no specific treatment for JE(3) , although an efficacious vaccine(4,5) and use of personal protective measures (PPMs)(6) will provide substantial protection against infection and disease.

In only a small proportion of humans infected with JE virus does symptomatic disease develop (reported range: 1/25 to 1/1,000)(7) after an incubation period of 5-15 days.  The case-fatality ratio among symptomatic infections with JE is about 20-30% and, among survivors, 30-50% have longterm neurological or psychological sequelae(3). In endemic areas, disease occurs primarily in children(7) ; by adulthood, most persons have serologic evidence of previous JE infection.

JE is principally a threat in rural agricultural areas. The virus is maintained in an enzootic cycle that prototypically involves Culex mosquitoes and wild birds (e.g. Ardeids such as egrets and herons)(4) . Secondary epizootic cycles may lead to infection of incidental hosts, such as humans and horses, and often involve pigs as amplifying hosts.

The main vector of JE is Culex mosquitoes, of which one of the most important is Culex tritaeniorhynchus, a species that tends to bite primarily at dusk and dawn, outdoors more than indoors and non-human mammals preferentially. Larvae of this species and many other Culex develop in standing water habitats, of which rice fields can be an important site because they may support very high larval populations(4).

Two epidemiologic patterns of JE occur. In temperate areas, JE is transmitted sporadically with periodic seasonal (summer and fall) epidemics, whereas in subtropical/tropical areas transmission can occur through much of the year(1,4). See Appendix 1 for a country-by-country description of JE risk and Appendix 2 for a map of JE risk areas.

Large-scale JE vaccine programs (targeted at children), changes in animal husbandry practices and increased urbanization have led to a substantial reduction in human cases of JE in some countries(1,4), e.g. Japan and Korea. However, JE may still present a risk to non-immune persons (e.g. travellers) in these areas because transmission may persist in a zoonotic cycle.

There have been few cases of JE reported among Western travellers. In the literature, only 55 cases of travel-associated JE among persons from nonendemic countries were reported in the 35 year period from 1973 to 2008; cases were identified as 33 tourists, nine expatriates, six soldiers and seven with unknown travel status(8). In the published data from the GeoSentinel Surveillance Network of more than 40 specialized travel and tropical medicine clinics in six continents and involving almost 50,000 patients, no case of JE has been reported(9,10) ; however, only a proportion of travellers in the Network visited JE risk areas. A possible case of JE was reported in a Canadian returning from Manchuria (northeastern China) in 1982(11) ; this may be the only Canadian case reported. Some travel-associated cases have involved minimal rural exposure, e.g. one night in a rural area(12). An overall estimate of the risk of clinical JE among short-term travellers to Asia is less than 1 per million(3), but in highly endemic areas during the transmission season risk may reach similar levels to the susceptible resident population (0.1-2 per 100,000 per week)(2).

Developing a precise risk estimate for an unprotected traveller for JE exposure/acquisition is very difficult and entails issues regarding the destination, the duration of travel, the season of travel and specific activities; see Appendix 3 for guidance regarding evaluation of a traveller's risk for JE.

Insect repellents that contain DEET (N,N-diethyl-m-toluamide)(13,14), permethrin-treated bed nets(6,15) and permethrin-treated clothing(16) have been shown to be efficacious in preventing the bites of Culex mosquitoes. Indeed, use of treated bed nets alone has been shown to achieve a substantial reduction in JE disease(6). Overall, well-used PPMs are expected to substantially reduce the risk of exposure to JE(17) (and other arthropod-borne diseases, e.g. dengue); such reduction might be of the order of 90%.

Until recently, the only JE vaccine available in Canada was the inactivated mouse brain-derived vaccine JE-VAX®, which was produced by Biken (the Research Foundation for Microbial Diseases of Osaka University) and distributed through Sanofi Pasteur Limited.  However, JE-VAX® is no longer produced or marketed and, hence, is no longer available in Canada.

An inactivated Vero cell culture-derived vaccine, IXIARO®, manufactured by Intercell AG and marketed in Canada by Novartis Pharmaceuticals Canada Inc, was approved for sale in Canada in December 2009(18) ; this is the only JE vaccine currently available in Canada.  It is important that the product monograph for IXIARO®(19) be read by those who prescribe and/or inoculate this vaccine. Some important features of IXIARO® include:

Risk for Japanese Encephalitis, by Country†(2)

NOTE: Since the situation regarding JE risk may change over time, it is recommended that travel health practitioners access up-to-date risk information, e.g. at the US CDC website2.

†Data are based on published reports and personal correspondence. Risk assessments should be performed cautiously because risk can vary within areas and from year to year, and surveillance data regarding human cases and JE virus transmission are incomplete.

‡In some endemic areas, human cases among residents are limited because of vaccination or natural immunity. However, because JE virus is maintained in an enzootic cycle between animals and mosquitoes, susceptible visitors to these areas still may be at risk for infection. 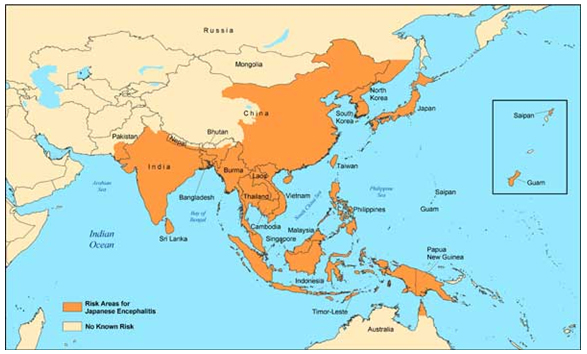 JE occurs in areas throughout most of Asia and parts of the western Pacific.

Although no specific duration of travel puts a traveller at risk for JE, a longer itinerary increases the likelihood that a traveller might be exposed to a JEV-infected mosquito.

In most temperate areas of Asia, JEV transmission is seasonal, and human disease usually peaks in sum­mer and fall.

In the subtropics and tropics, JEV transmission patterns vary, and human disease can be sporadic or occur year-round.

The mosquitoes that transmit JEV feed on humans most often in the outdoors, with peak feeding times after sunset and again after midnight.

Extensive outdoor activities (e.g., camping, hiking, trekking, biking, fishing, hunting, or farming), espe­cially during the evening or night, increase the risk of being exposed to a JEV-infected mosquito.

Accommodations with no air conditioning, screens, or bed nets increase the risk of exposure to mos­quitoes that transmit JEV and other vector-borne diseases (e.g., dengue and malaria).

Use of Personal Protective Measures

Use of PPMs, e.g. bed net, repellent, clothing treatment, are expected to provide substantial protection against the bites of the mosquito that transmits JE.  The level of personal compliance with PPMs can significantly alter the risk of exposure to JE.

Strength and Quality of Evidence(30)

14 Thavara U, Tawatsin A, Chompoosri J et al. Laboratory and field evaluations of the insect repellent 3535 (ethyl butylacetylaminopriopionate) and DEET against mosquito vectors in Thailand. J Am Mosq Control Assoc 2001;17:190-95.