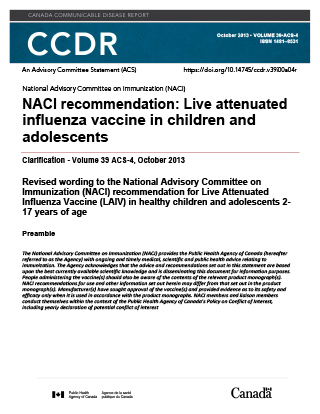 The National Advisory Committee on Immunization (NACI) provides the Public Health Agency of Canada (hereafter referred to as the Agency) with ongoing and timely medical, scientific and public health advice relating to immunization. The Agency acknowledges that the advice and recommendations set out in this statement are based upon the best currently available scientific knowledge and is disseminating this document for information purposes. People administering the vaccine(s) should also be aware of the contents of the relevant product monograph(s). NACI recommendations for use and other information set out herein may differ from that set out in the product monograph(s). Manufacturer(s) have sought approval of the vaccine(s) and provided evidence as to its safety and efficacy only when it is used in accordance with the product monographs. NACI members and liaison members conduct themselves within the context of the Public Health Agency of Canada's Policy on Conflict of Interest, including yearly declaration of potential conflict of interest.

With respect to the live attenuated influenza vaccine, NACI recommends its use for healthy children and adolescents 2 to 17 years of age without contraindications.

It is anticipated that the superior efficacy for LAIV over TIV extends beyond age 6 years, but the evidence does not indicate at which specific age the efficacies of LAIV and TIV become equivalent.

If LAIV is not available for those for whom it is considered superior, TIV should be used.

The study by Fleming et al. (2006) looking at 2229 asthmatic children 6-17 years of age (mean age 11)  showed superior efficacy of LAIV over TIV in this age group. These results seem to have been mostly driven by influenza B and were not significant for the H3N2 strain. Although the study has limitations, such as the fact that the study population was asthmatic and so may not be generalizable to all children, its strengths include a randomized design and culture confirmed outcome.

It is hypothesized that as children get older, they are more likely to have had a previous influenza infection, which might interfere with the immune response elicited to LAIV. It is not known at what age LAIV efficacy is no longer superior to TIV in children. In adults, comparative efficacy trials of LAIV and TIV have shown either no difference or superior efficacy of TIV. More evidence is needed that directly compares the efficacy and effectiveness of LAIV and TIV, especially in children over 6 years old and NACI considers this a research priorityFootnote 3.

NACI also acknowledges that LAIV offers other advantages to children, including needle-free administration. As well, as a live, replicating whole virus formulation administrated intranasally, it elicits mucosal immunity which may more closely mimic natural infection and contribute to the superior efficacy compared to TIV.