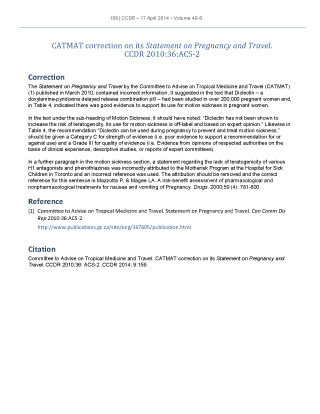 CATMAT correction on its Statement on Pregnancy and Travel. CCDR 2010:36:ACS-2

The Statement on Pregnancy and Travel by the Committee to Advise on Tropical Medicine and Travel (CATMAT) Footnote 1 published in March 2010, contained incorrect information. It suggested in the text that Diclectin - a doxylamine-pyridoxine delayed release combination pill - had been studied in over 200,000 pregnant women and, in Table 4, indicated there was good evidence to support its use for motion sickness in pregnant women.

In the text under the sub-heading of Motion Sickness, it should have noted: "Diclectin has not been shown to increase the risk of teratogencity. Its use for motion sickness is off-label and based on expert opinion." Likewise in Table 4, the recommendation "Diclectin can be used during pregnancy to prevent and treat motion sickness." should be given a Category C for strength of evidence (i.e. poor evidence to support a recommendation for or against use) and a Grade III for quality of evidence (i.e. Evidence from opinions of respected authorities on the basis of clinical experience, descriptive studies, or reports of expert committees).

In a further paragraph in the motion sickness section, a statement regarding the lack of teratogenicity of various H1 antagonists and phenothiazines was incorrectly attributed to the Motherisk Program at the Hospital for Sick Children in Toronto and an incorrect reference was used. The attribution should be removed and the correct reference for this sentence is Mazzotta P, & Magee LA. A risk-benefit assessment of pharmacological and nonpharmacological treatments for nausea and vomiting of Pregnancy. Drugs. 2000;59 (4): 781-800.

Committee to Advise on Tropical Medicine and Travel. Statement on Pregnancy and Travel. Can Comm Dis Rep 2010:36:ACS-2.